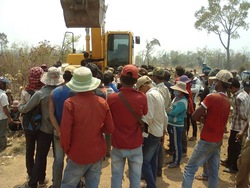 Members of the community of Preah Vihear physically blocking the clearing of their land. (Photo: Sangke II community)
People’s Coalition on Food Sovereignty | 11 November 2018
Reference: Sylvia Mallari – [email protected]
Include land-related repression in Cambodia probe, UN rights envoy urged
A global network of various grassroots groups of small food producers and food sovereignty advocates urged United Nations (UN) Special Rapporteur on the situation on human rights in Cambodia Rhona Smith to look into the recent spate of alleged cases of state-perpetrated harassment of peasants and indigenous peoples struggling for their right to land in her review of the human rights situation in Cambodia.
The People’s Coalition on Food Sovereignty (PCFS) cited the mobilization of more than a thousand people from different provinces in Cambodia on Nov. 6, 2018 to submit their petitions to various government agencies in Phnom Penh but was blocked by the authorities.
It happened while Smith was still in the country for a mission since after the July elections, upon the invitation of the government. Her visit was the second for this year, and it focused on how Cambodia localizes the UN Sustainable Development Goals (SDGs).
Some 500 people from Thbong Khmom province were prevented from entering the capital while another 660 from the provinces of Sihanouk, Svay Rieng, Preah Vihear, and Kandal were forced by the police to stay in the new freedom park inside the city.
They were from farming and indigenous communities that have ongoing land disputes with local landlords and Chinese investors. The organizers – led by the Coalition of Cambodian Farmers Community (CCFC), a member organization of PCFS – said that they planned to go to the Justice of Ministry, National Assembly, Agricultural Ministry, and Land Management Ministry to demand the immediate resolution of their land cases.
“We are enraged that people were denied of their rights to freely express, assemble, and raise their grievances to the government. This clearly contradicts the freedoms and rights guaranteed to civil society groups since the repeal last week of the Ministry of Interior’s October 2017 instruction, which formerly required CSOs to secure government permits for their activities. It was unfortunate that Smith missed what had happened,” said Sylvia Mallari, global co-chairperson of PCFS.
“The reasons cited by the Cambodian authorities are unacceptable such as the claim that the demonstration would have been a ‘disruption of public order.’ In fact, we actually find it ironic that the excuse used by the authorities to deny the communities of their freedom was the ceremonial procession practice for the country’s National Independence Day,” she added.
Mallari however welcomed the UN envoy for calling to drop the charges against land rights activist Tep Vanny and urging the government to employ “more transparency, fairness and by ensuring a holistic approach” in addressing land disputes, coming from the UN envoy’s visit in the floating villages of Kampong Chhnang province. Smith tackled a few land-related issues during the press briefing on Nov. 8 for the conclusion of her 11-day mission.
In this regard, the PCFS official also asked Smith to look into the revival of charges against community leaders and development workers in Preah Vihear following a fact-finding mission PCFS co-organized in the province with local group and PCFS member Ponlok Khmer (PKH) as well as with the International Indigenous People’s Movement for Self-Determination and Liberation (IPMSDL), Asian Peasant Coalition (APC), and PAN Asia Pacific (PANAP) last September.
Four leaders of the province’s Prame commune, largely inhabited by the indigenous Kuoys, and two staff of PKH were summoned to court on Nov. 5, 2018 for a 2014 case concerning the communities’ confiscation of two bulldozers owned by Chinese conglomerate Guangdong Hengfu Group Sugar Industry Co., Ltd. They were accused of inciting people to prevent government development, although the bulldozers were already returned to the company last year.
“This is clearly an act of intimidation to pacify the resistance of the affected communities, which is consistent with the mission’s findings that local and national authorities are facilitating Hengfu’s land grabbing,” Mallari said.
The fact-finding mission reported that Hengfu has grabbed more than 13,000 hectares of land in the province. In 2011, government awarded the Chinese company with an economic land concession (ELC) which now covers around 36,000 hectares.
Mallari stressed that land disputes are a pressing concern that necessitate immediate resolution.
“Such repressive actions only affirm the legitimacy of the rural people’s struggles against land grabbing, among the many other violations of their human rights, in Cambodia. The government has chosen to listen to its foreign and corporate backers, at the great expense of the rural communities and indigenous peoples – as well as the environment,” Mallari said.
Mallari added that while state repression has been ongoing in the Cambodia for decades, its upsurge in recent years is due to China’s Belt and Road Initiative.
“Cambodia relies on Chinese investments for its development, and more so now that the BRI is in full swing. [State] repression is always used to give way to foreign mega-project investments, which has wreaked havoc on rural and indigenous communities. This is true not only in Cambodia, but as well as in many countries such as Sri Lanka, India, and Philippines, among others” she said.
PCFS asked the government of Cambodia and its newly-formed task force under the Ministry of Interior to address these blatant acts of repression and immediately hold accountable those behind them. The task force was created early this month to address the government suppression of civil society activities, in light of Smith’s visit.
The network also hopes that these cases of repression associated with land struggles will be tackled in the Universal Periodic Review of Cambodia by the UN Human Rights Council (UNHRC) in January 2019.
“We call on our members and networks to stand with the rural peoples of Cambodia and all over the world, and to persevere with our movement against land grabbing and state repression in order to advance the people’s food sovereignty,” said Mallari. ###
REFERENCES:
·         https://cambodia.ohchr.org/sites/default/files/pressstatementsource/181108%20ENG_END%20OF%20MISSION%20STATEMENT.pdf
·         https://www.khmertimeskh.com/50547900/authorities-block-land-protesters/
·         https://www.voacambodia.com/a/pm-hun-sen-creates-task-force-to-address-civil-society-concerns/4647309.html?nocache=1&fbclid=IwAR0HxPO9XaTIshjHzmyWVV7e6GBnvF_f5UbnIEyzxPyX_S8aQqhrbkIA99A
·         https://phnompenhpost.com/national/ministry-ups-scrutiny-ngos