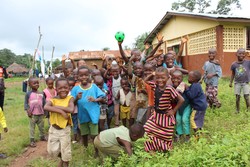 Children of Mamanka village, one of the communities in Port Loko District, Sierra Leone that are part of a court order requiring a palm oil subsidiary of India's Siva Group to return 41,582 hectares of lands to the communities and pay them arrears of rent for nearly US$250,000. In August 2017, the women of Mamanka village hosted a meeting with leaders from other African communities and international organisations to share experiences on struggles against industrial oil plam plantations, where this photo was taken.
Namati | 7 November 2018
Court orders oil palm company to return land and pay arrears of rent to landowners in Sierra Leone
Freetown, Sierra Leone, November 6, 2018 — The High Court of Sierra Leone has ordered bailiffs to return 41,582 hectares of land previously leased to Sierra Leone Agriculture Ltd (SLA) to three land-owning communities in Bureh, Kasseh, and Maconteh Chiefdoms in Port Loko District in northern Sierra Leone.
The Indian-owned and Singapore-based company SIVA Group bought the SLA concession for US$5 million in 2011. The Company made several promises but failed in fulfilling its responsibilities, including payment of rent to the landowners for the last three years.
In addition to returning possession of the land, the court ordered SLA to pay arrears of rent to the landowners totaling nearly US$250,000.
Represented by Namati, the chiefdom councils and the landowners filed a case with the High Court on 6th June 2018 to recover possession of the land, arrears of rent and damages for breaching the lease agreement. In addition, the plaintiffs asked the court to issue an injunction against the company and its agents, restricting them from any dealings on the land, from entering the land, or moving any assets out of Sierra Leone. The court granted the injunction on 20 June 2018 and on 5 November 2018 ordered the land to be restored and arrears paid.
Milton Kamara, a member of the affected land-owning families, expressed the following after the recent judgment: “I wasn’t sure we would ever get justice after trying on our own for many years to get the company to comply with their obligations to us. Now I know differently.”
Namati’s Sierra Leone Director, Sonkita Conteh Esq., who filed the case on behalf of the affected land-owners, said, “Again, our courts have shown that they are not averse to holding corporate players accountable. This case sends a strong message to companies investing or seeking to invest in Sierra Leone to be responsible and follow the laws of the country and the agreements they negotiate.”
Following their legal victory to reclaim possession of their land, the landowners have expressed interest in becoming co-owners in any future investment. This would mark the first time that landowning communities in Sierra Leone are taking a partnership-centered approach to agribusiness.