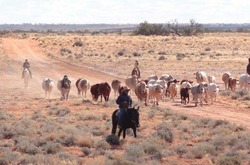 One of the properties belonging to S. Kidman & Co, Anna Creek, is the biggest cattle station in the world.
Australian Financial Review
Shanghai's Pengxin diverted $567 million to Brazil after snub on Kidman sale
by Su-Lin Tan
Shanghai-based conglomerate Pengxin redirected the $US400 million ($567 million) it was prepared to pay for Australia's largest private land holding, S. Kidman & Co, into investments in Brazil after it was snubbed by then treasurer Scott Morrison in 2016, a move that "discouraged the conglomerate from looking for further deals in Australia".
A former senior executive of Pengxin who was close to the deal said there was a "bitter aftertaste" when its $371 million bid for S.Kidman, which owns almost 11 million hectares of cattle stations including the world's largest, Anna Creek, was blocked in 2016.
The bid was made through Pengxin's subsidiary Hunan Dakang Farming Pasture.
Pengxin moved on and took the $US400 million as well as another $US200 million and invested it in deals in Brazil.
Information from the new Chinese Investment in Australia (CHIIA) Database created by Australian National University in collaboration with Treasury shows that Chinese investments in Australia slumped 40 per cent last year, twice the drop worldwide.
While concerns the decline in Chinese interests in Australia was caused by poor China-Australia political relations worsened by xenophobic tensions, Chinese deal intermediaries such as lawyers and agents say economic reasons precede political ones.
Tight capital flows and softening returns particularly in the most popular Chinese asset group, residential property, are mostly responsible for the departure of investments, says legal firm Hall & Wilcox, which handles a large volume of deals in Australia.
"The largest transactions at the height of Chinese investments in Australia were mainly property projects including residential development but the slowdown in the property market and clampdown on investors both local and Chinese have a lot to do with the drop in number and value of investments," Hall & Wilcox's head of China practice, Eugene Chen, said.
"The detour from property has led to more interests in smaller deals like agribusiness, supply chain businesses, 'daigou' businesses and smaller deals in health businesses, so a fall in value of investments is significant."
Golden Week loses gloss
While they were not all gone, a large gap was still felt, Mr Chen added. Some clients cited an overexposure to Australia and lack of bank funding for investments.
A Sydney hotel deal-maker who targets Chinese capital said the waiting time to "move" $10 million out of China had usually been about a year, but now was almost "indefinite".
"It feels like Chinese investors are not allowed to move anything out any more," he said.
"And if there are racial issues stopping them, they will never say so to save face."
For those who are still investing, they are interested in smaller and more income-producing deals like office blocks, Knight Frank Head of Asian markets Dominic Ong said.
"The [Chinese] real estate market sentiment is average. There are still some Chinese buyers looking but they are looking at other kinds of asset classes, more passive ones like offices," Mr Ong said.
Even on the retail level, Chinese trade is slowly fading away. Big Chinese holidays such as Golden Week last week used to be house-buying sprees for Chinese travelling overseas, but this year's Golden Week was dire, local agents say.
The combination of tougher penalties and higher surcharges on foreign purchases of property and concerns over racial hostility have turned away smaller mum and dad buyers.