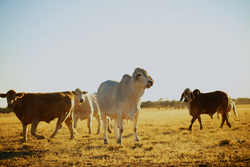 Farm and asset management company Gunn Agri announced it has finalized the acquisition of Abingdon Downs, a 484,000-hectare breeding property in Queensland, from the Keough Cattle Company, for an undisclosed sum.
Included in the deal were 27,400 head of cattle, which will be folded into the herd managed by the fund’s operating company Cunningham Cattle Company, bringing the total herd head count to 71,500.
Gunn Agri Partners was founded by Bill Gunn, Daniel Hough, Bradley Wheaton, and Alan Hoppe –  a former Macquarie Agricultural Services Chief Operating Officer once based in Brazil. All founders have extensive experience in agricultural operations, investing, and funds management in Australia, North and South America, Europe, and Africa.
Managed by Gunn Agri Partners, the Gunn Agri Cattle Fund,  the flagship Cattle Fund strategy for the firm, held its fourth and final close on April 16 of this year. Including Abingdon Downs, the fund is expected to reach assets under management valued at A$200 million (US$155.5 million).
“Abingdon Downs will play an important role in Cunningham Cattle Company’s breeding operations with its high-quality grey Brahman herd bred by the Keough family over many years,” said Bill Gunn, chairman, Gunn Agri.
IMG_0941 (2)
Supported  by the strength of the Australian cattle market, strong demand fundamentals, and Australia’s competitive cost of production, Gunn Agri has successfully built  a portfolio in accordance with its stated strategy, focusing on properties in Queensland, but also in Northern New South Wales, and the Northern Territory.
Upon this foundation, Gunn Agri has quickly increased its AUM to meet one of its key objective pillars of the fund – “of buying assets well and building a portfolio of working assets.” Additional properties managed by Cunningham Cattle Company include:
~ the 400,000-hectare Esmeralda Station in North Queensland, which was closed in February 2016 and is being used to produce weaners for grow-out in other locations. Since its acquisition, Esmeralda has seen developments including 30 percent more watering points, and improved fencing, yards, and pastures.
~The 51,598 hectare Katandra Aggregation, which includes Katandra and Illalong properties where young cattle are grown out, was settled in the second half of 2017, since which time Cunningham Cattle Company has expanded its capacity to grow-out cattle through long-term agistment arrangements with experienced, large-scale operators.
~ The 36,095-hectare Maranoa Aggregation in Southwestern Queensland. Settled in December 2015, this southern operation includes grow-out locations: Ballaroo, Ekari Park, and Fairview.
~ And, the 18,338-hectare Goodar Station, which was closed on in March 2016 and is being used for breeding, fattening, fodder production, and cash cropping.
These aggregations have  outperformed the market for pastoral land as a result of strategic measures taken, including the development of watering points and infrastructure, the improvement of grazing productivity through land development, and the transition of pasture land to cropping among the fund’s southern holdings.
This success is reflected in the fund’s most recent financial results to June 30, 2018, released in their latest statement.
Currently, the fund has a Net Asset Value standing at A$1.12, up from an inception value of A$1.00. Considering expectations of a J-curve impact from transaction costs incurred during the investment period, overall performance of the fund was in line with Gunn Agri’s expectations. The fund’s land portfolio increased in value by 7.9 percent above FY2017 valuation plus capex spend for FY2018 (excluding stamp duty and acquisition costs), according to the company, which in turn brought the total portfolio uplift since inception to June 30, 2018 to 34.5 percent.
Moving forward, Gunn Agri Partners will continue developing and operating its agricultural assets on behalf of its institutional investors, and undertaking advisory work on horticulture, livestock, and irrigated and row cropping. In addition to its cattle strategy, the firm is pursuing investment opportunities and permanent plantings of almonds.