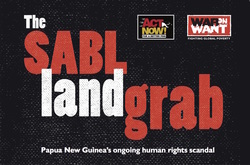 The appalling human rights abuses being suffered by the victims of the huge SABL land-grab in Papua New Guinea are the focus of a new report published by ACT NOW! and UK based charity, War on Want.

The SABL Land Grab: Papua New Guinea’s Ongoing Human Rights Scandal highlights the devastating impacts on people living in rural communities and gives a voice to those who have suffered the illegal loss of their land to logging and oil-palm plantations.

People like Peter Tai who says people were threatened, beaten and turned away by armed police and the army when they tried to stop the logging and oil palm planting on their traditional land

“When the company uses the police and army, they twist the law and beat us up very badly, to the point where we are afraid to attempt stopping the company again.”

It is not only violence that people have suffered:

“We, the people have lost our God given birth right to our land for 99 years and significantly our traditions, cultures, customs, virgin forest and friendly environment, the eco systems we depend on and our peaceful community living and life setting”, explains a landowner from Pomio.

The report highlights how the SABL land grab, as well as breaching PNG’s own land laws and Constitution has breached a whole raft of international laws and conventions.  These include the International Convention on the Elimination of Racial Discrimination, the United Nations Declaration on the Rights of Indigenous People, and the International Covenant on Economic, Social, and Cultural Rights, and many of the fundamental human rights protected in the Universal Declaration of Human Rights.

ACT NOW! and War on Want are calling for immediate action to end the land grab and cancel the leases by the PNG government but are also asking the international community to be more proactive in pressuring for action by the authorities.

This includes calling on the UN Special Rapporteurs who have already written to the government expressing their concerns about the human rights abuses to come to PNG to see the impacts first hand and speak directly with the government.

They are also calling on China and the other countries taking logs and palm oil from the SABL areas to stop this illegal trade.

The testimonies that the report presents were collected over a two-year period by researchers who visited SABL affected communities in six different Provinces; New Ireland, East New Britain, Morobe, Oro, and East and West Sepik. Some of the testimonies can also be viewed as short videos on the ACT NOW! YouTube channel.

More than 5 million hectares of land was stolen from rural communities using fraudulent SABL agriculture leases between 2003 and 2009. The leases were exposed as having been unlawfully issued by a Commission of Inquiry that released its findings in 2013.

Since then, despite numerous promises, the PNG government has failed to cancel the leases, stop the logging and return the land to its rightful owners. Instead, the government is still allowing logs from SABL areas to be exported, further areas to be cleared and planted with oil palm and is allowing palm oil produced on stolen land to be exported.