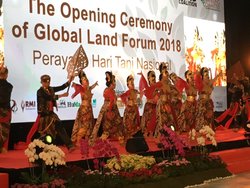 ILC Bandung Declaration links agrarian reform to land and social justice
by Wangu Mwangi
27 September 2018: An 11-point declaration adopted by the Assembly of Members of the International Land Coalition (ILC) identifies agrarian reform and protecting land and environmental defenders as two urgent areas for action. The Declaration states that success in achieving the SDGs will depend on “our willingness to fundamentally transform systems that promote inequality and injustice, and fuel conflict and exclusion.”
The Assembly convened at the conclusion of the 2018 Global Land Forum (GLF), which took place from 22-27 September 2018 in Bandung, Indonesia, and drew 550 delegates from 84 countries.
During the Forum opening session, Dewi Kartika, General Secretary, Indonesian Consortium for Agrarian Reform (KPA), and Chair of the GLF National Organizing Committee, highlighted the four main objectives for the GLF: taking effective action to tackle land grabbing; revisiting agrarian reform debates; ensuring food sovereignty; and working towards women’s rights to land. She emphasized the need to continue to strive for social justice in the case of rights to land in Indonesia, lamenting that “little breakthrough” had been achieved in bringing about “genuine agrarian reform,” noting that cooperation between civil society organizations, government and communities is crucial to achieve and consolidate real transformation.

Describing Indonesia as a global leader for agricultural reform, ILC Director Michael Taylor emphasized three key messages for the Forum: the recognition and redistribution of nine million hectares by 2019 as one of President Joko Widodo’s most ambitious targets; that land certification alone does not equate to agrarian reform, which involves restructuring and redistributing land rights to those who have none; and that one of the concrete steps the government can take is to pass the decree on agrarian reform, “which would constitute a milestone after more than ten years of debate.” Taylor also called for decriminalization of land defenders as an important step towards agrarian reform.

The opening ceremony coincided with National Peasants Day in Indonesia and included a presentation by representatives from 15 provinces, urging the government to “immediately recognize and celebrate” their struggle to acquire land rights and justice.

Socioeconomic inequality has reached levels that threaten to undermine the global goal of leaving no one behind.

Similar to past events, the 2018 GLF was preceded by a day dedicated to addressing specific challenges and opportunities for the host country and region under the theme, ‘Moving Beyond Words: Agrarian Reform for Equality and Social Justice.’ The session provided an opportunity to discuss “the gap between political will and policy implementation on the ground,” despite achievements in Indonesia such as the 1960 Basic Agrarian Law and more recent targets to redistribute and legalize nine million hectares of land and guarantee local community access to 12.7 million hectares of state forests through social forestry programmes.

Held on the last day, the ILC Assembly brought together 250 representatives from civil society and multilateral organizations from 77 countries. In the Bandung Declaration, delegates express concern that since the last GLF, held in Dakar, Senegal, in 2015, extreme socioeconomic inequality has reached levels that are both “unjust and unsustainable,” which threatens to undermine the global goal of leaving no one behind.

Describing 2017 as “the deadliest year on record” for land and environmental defenders around the world, the Declaration calls for a reversal of the “dramatic and unacceptable upward trend” of killings, attacks and criminalization of both individuals and communities, and pledges to mobilize the coalition’s voice to promote accountability and justice, and directly support the protection of those under threat.

On agrarian reform, the Declaration calls on countries to “return to national political agendas” as a necessary action to redress inequality in rural societies, and urges the private sector and governments to stop large-scale land investments that dispossess communities or indigenous peoples. The Declaration also expresses coalition members’ renewed commitment “to demonstrate gender justice in our own organizations and in our coalition, just as we work for a more gender-just world.”

Drawing attention to “two important announcements” made at the GLF – the moratorium on palm oil expansion, and the signing of the Presidential decree on agrarian reform – the Declaration underscores that if agrarian reform is going to build justice, it must redistribute land. Participants call on the Indonesian Government to address land-based conflict by adopting the 444 priority areas for land redistribution presented by KPA to the Minister of Coordinating Economics.

ILC is a global alliance of 256 civil society and intergovernmental organizations from 77 countries that seeks to realize land governance for and with the people at the country level, responding to the needs and protecting the rights of women, men and communities who live on and from the land. Held every two to three years, the GLF brings together ILC members and other stakeholders to advance understanding of the complex and dynamic political, economic, environmental and social linkages between land governance, food security, poverty and democracy. The Assembly of Members provides a platform for ILC members to adopt declarations with common commitments to action.