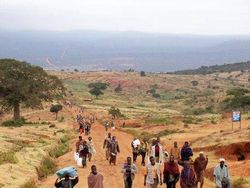 Dirty deals threaten Kenya's food security, report says
A global index has singled out Kenya as one of the countries whose food security is undermined by various forms of corruption, underlining the impact graft has had on taxpayers' lives even as the government vows to root out the vice.
According to a report by think tank Economist Intelligence Unit (EIU), land grabs are another common mechanism of corruption threatening food security, citing instances where public or private entities use backdoor deals to push favourable deals to secure land for themselves while displacing small farmers.
“Corruption at the highest levels of politics can affect entire sectors— the Kenyan government, for example, has been plagued by corruption scandals related to national grain reserves and market prices,” the EIU says in its newly released 2018 Global Food Security Index.
Kenya was ranked 87 out of 113 countries, with the report noting that a prolonged electioneering period during last year’s polls stalled economic investments in several sectors including agriculture.
“Even short-term uncertainty can take a toll, as when post-election unrest in Kenya in 2017 hurt the tourism and retail sectors and delayed infrastructure projects,” the think tank notes.
Singapore scooped the top top spot in the index that measures the affordability, safety and availability of food in 113 countries across the globe.
Original source: Business Daily
TWITTER
FACEBOOK
WHATSAPP
PRINT
E-MAIL
TWITTER
FACEBOOK
WHATSAPP
E-MAIL