Land grabbing is now considered a crime against humanity, but few land grabbers end up in jail. Instead, if you search the specialised website farmlandgrab.org for news about law suits, court proceedings, convictions or imprisonment related to land deals, what you will largely find are reports of local communities being accused of wrongdoing for defending their own territories against powerful companies! Yet the links between crime, corruption and those engaging in agricultural land deals are real.

In 2013, in the annex to a report on a land grab in northern Senegal involving Italian investors suspected of money laundering, GRAIN produced a summary of other cases around the world where large farmland deals were being signed to potentially move illicit funds.

GRAIN recently learned that several of those cases have been prosecuted in the courts, or been acted upon by national authorities, and so we have compiled a short update on these developments. The good news is that in some cases the crimes are being stopped. The bad news is that this further confirms the overall trend of corrupt businesspeople and politicians using farmland deals to enrich themselves illegally, and the situation is little different for other land sectors like timber. Since we compiled our list in 2013, numerous other cases have come to light, of which we highlight some of the more well-documented cases below.

In 2013, we reported that the former treasurer of the ruling People's Party in Spain, Luís Bárcenas, was suspected of laundering money through a 3,000 hectare (ha) lemon plantation in northern Argentina, owned by a company called La Moraleja S.A.

La Moraleja is infamous in Argentina. The company was established in 1978 during the military dictatorship of Juan Carlos Onganía by Onganía's secretary and a Panamanian company called RedWood Finance & Investment Corp. RedWood was represented by Ángel Sanchís Perales; treasurer of Spain's People's Party during the government of Manuel Fraga Iribarne. (Sanchís’ eldest son, Ángel Rafael Sanchís Herrero, is the current president of the company.) Over the past 40 years, La Moraleja has maintained deep connections with Argentina's repressive rulers. This was evident in February 2018, when the company sent its condolences to the funeral of Luciano Benjamín Menéndez, one of Argentina's most notorious and genocidal generals. It was only at this time that the public learned that the general's son, Martín Horacio Menéndez, was the acting general manager of La Moraleja.

In 2018, the courts concluded that Bárcenas had indeed manufactured illegal contracts and false invoices for the party resulting in money being skimmed off of its accounts and sent to Switzerland. From there, funds were wired to Argentina into the Moraleja farm, under the management of Ángel Sanchís and his son- both associates of Bárcenas. The millions made from the farm were channelled back into personal accounts in Spain, at times in the form of "disguised transfers" that were based on fabricated service contracts between Bárcenas and Ángel Sanchís. 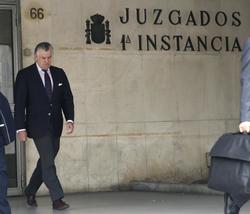 The courts verified that these transactions took place and Sanchís and his son were found guilty of laundering €3 million through this setup and sent to prison for one year each. Bárcenas was also convicted and sentenced to 33 years in prison. As a result of these findings, Spanish Prime Minister Mariano Rajoy was subject to a motion of censure on 1 June 2018 and removed from power.

In the meantime, while the Spanish courts were doing their investigations, Greenpeace Argentina found that the Moraleja farmland - once a protected area- had been acquired and cleared of its forest in contravention of Argentina's forestry laws. Of the total area, 3,000 hectares of high value wood species were razed and lemon trees were planted in their place; a violation of Argentina's Law for the Protection of Native Forests. The annual lemon harvest went partly to The Coca-Cola Company to make Sprite, and the rest was exported to Europe. Another 15,000 hectares was used to produced genetically modified soy. The farm owners contend that they were given waivers by local authorities to convert the woodlands - which would make the authorities complicit in the infraction. The provincial government had, indeed, given its support by declaring the company's plantation project to be of "provincial interest". For now, the farm has lost its "sustainable agriculture" certification and contract with Coca-Cola but the owners say they will reforest the 3,000 ha and convert 7,000 ha of the soy farm to lemon production. Maybe this will begin when they are released from jail?

We previously reported that the French anti-fiscal crime group, TRACFIN, was looking into foreign financial flows into the French wine sector - where potentially hot money from Ukraine, Russia and China was being monitored for possible laundering through farmland investments. In June 2018, French police seized 10 vineyards owned by the Chinese conglomerate Haichang for suspected tax fraud and forgery. The police believe that the vineyards were purchased with ill-gotten funds from the Chinese government for the purpose of laundering.

Haichang, a vast conglomerate involved in real estate, oil, tourism and cargo shipping is controlled by 56-year-old businessman Naijie Qu. He had spent €55 million to buy 24 vineyards in France over recent years. The company intends to appeal. 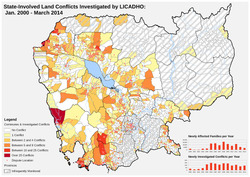 Image : Cambodian League for the Promotion and Defense of Human Rights (LICADHO)

In a significant decision made on 15 September 2016, the International Criminal Court (ICC) in the Hague announced that it would consider land grabbing an act that falls within its mandate. This means that cases of land grabbing that are systematic and sufficiently serious in impact may be prosecuted as "crimes against humanity". A case has been filed against the government of Cambodia, covering the elements we highlighted in 2013, but the ICC has not yet decided whether it will examine it or not.

The Dutch agricultural lender Rabobank set up a multi-million-euro fund called RaboFarm to channel capital into Romanian farmland and reap a return for its investors. European pension funds are keen participants and since 2011 the fund has amassed 21,000 ha spread across 51 villages in Romania. But the venture may lie on a series of scams. Since 2013, various intermediaries that RaboFarm apparently went through have been convicted with suspended sentences for theft, bribery and fraud by the country's anti-corruption agency. According to investigators, these are not isolated events but rather suggest a pattern of the fund "buying land with contested ownership" in a country where land grabbing is rife. Rabobank claims it has no connection to any of the crimes.

In Indonesia, in 2013, anti-corruption authorities arrested chief justice Akil Mochtar and two of his associates for their involvement in a massive bribery scandal underpinning Indonesia's electoral process. Mochtar and his cohorts were convicted and imprisoned for the vote rigging, but civil society groups took the investigations further. They learned that much of the money collected by the judge came from a complex operation that involved local politicians setting up shell companies in other people's names and issuing these companies fake licenses. These paper companies and their false permits were then sold to a legitimate Malaysian palm oil firm, CBIP, who cleared the land and converted it to palm oil plantations.

This practice is reportedly widespread in Indonesia and robs local indigenous communities of their lands and livelihoods, and yet the perpetrators rarely get caught. Around the same time that Mochtar was arrested, anti-corruption authorities also sentenced the former head of the Central Sulawesi district of Buol, Amran Batalipu, to 7.5 years in jail for taking bribes from Hardaya Inti Plantations owner Siti Hartati Murdaya and signing away 22,000 ha of customary lands and forests without the knowledge or consent of the community for the creation of a massive palm oil plantation. Hartati comes from one of Indonesia's richest and most powerful families. It's no surprise then that she was sentenced for less than 3 years in prison (half that of the district official), nor that Hardaya Inti Plantations remains operating. 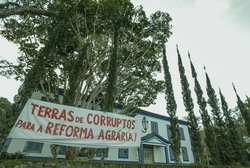 Ricardo Teixeira, the former head of Brazil's football federation, is a central actor in the massive corruption scandal that has recently engulfed the Fédération Internationale de Football Association (FIFA). Teixeira, a former FIFA executive committee member, is under an international arrest warrant from the US’ justice authorities for his role in a $200 million corruption scandal involving several top FIFA executives. Brazilian and US prosecutors also recently identified a $22 million payment from a Qatari company into a bank account Teixeira has with Pasche de Monaco, a subsidiary of the French banking group Crédit Mutuel. The payment was made shortly after FIFA's vote to attribute the 2022 World Cup to Qatar.

In June 2018, Spain's National Court initiated a trial against Former FC Barcelona president Sandro Rosell for a money laundering scheme he is said to have orchestrated with Teixeira related to Brazil's national football team. Part of this scheme involved corrupt payments through a Brazilian company, VSV Agropecuaria, registered to the address of Teixeira's 1,500 ha Santa Rosa farm in the State of Rio de Janeiro, as well as rental payments supposedly made for the use of a portion of his farm.

In June 2017, 350 families of Brazil's Landless People's Movement (MST) occupied Teixeira's Santa Rosa farm. Their action was meant to highlight how corruption and money laundering are used by Teixeira and other Brazilian elites to acquire vast landholdings in the country.