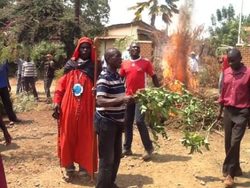 Some of the Dominion Farms Limited workers protesting at the company headquarters early this year. They accused the American investor of taking off without paying their dues amounting to over Sh. 350 million. Photo by Philip Onyango/KNA.
KNA | October 11, 2018

Siaya county government has not surrendered the Yala swamp to a private sugar milling company as alleged by a section of the media, the county director of communications, Jerry Ochieng has said.

Ochieng who dismissed the reports that the swamp had been handed over to West Kenya sugar company after an American investor, Calvin Burgess left under mysterious circumstances, said the vast wetland was in the hands of Kenya Commercial Bank, who took over as receiver managers of the Dominion Farms Limited, Burgess’ firm that was undertaking mechanized rice farming.

Speaking to the media in Siaya on Wednesday, the Communication Director said the county government had not entered into a deal with anybody else, except the bank.

“The county government is only aware of the KCB which has sent a receiver manager to manage the firm,” he said, while dismissing claims that the county government had entered into a deal with the Rai family, owners of West Kenya Sugar Company for the takeover of the land previously under Dominion Farms Limited.

The  West Kenya Sugar Company General Manager, Gerald  Okoth  equally dismissed the reports, saying that their interest in the swamp was as a result of an earlier deal with Dominion to buy sugarcane from its farm.

He said the company had paid for some of the cane and it had to harvest and haul it to its factory even after the exit of the American from the scene.

The move was criticised by workers and local leaders who accused the investor of taking off without paying his workers over Sh.350 million in salary arrears.

Dominion Farms left Yala before expiry of its lease over what chief executive and founder Calvin Burgess  termed as unfavourable business environment in the region.

People Daily can exclusively reveal that the deal between Rai family representatives and Siaya County government was deliberated and agreed on over the last six months.

It is, however, not clear how the National government, through Lake Basin Development Authority (LBDA), ceded ownership of the swamp to the county.

The deal has political statements written all over it, especially given the manner in which Dominion closed shop. Burgess grew rice on the farm before he claimed some residents and high-profile politicians from the lake region were trying to extort money from him and had been frustrating his business.

Fine details of the money involved and lease period remain scanty, but the wealthy Rai family has already deployed private security guards around the vast swamp.

“The swamp was under LBDA which gave it to Calvin Burgess after a number of investors failed to make anything out of it. Burgess was to reclaim the swamp, develop and own it for 25 years after which he would return the land to the authority,” a source who requested anonymity told People Daily yesterday.

Sections of the wetland have been hived off and allotted to residents living nearby ostensibly to appease them and avoid the pitfalls that may have impeded Burgess during his chaotic time as landlord.

A source privy to the new deal with Rai revealed that the family has agreed in principle with Siaya county to grow sugarcane on the swamp.

Denizens of Imbo have been allocated 450 acres of the swamp that filters water into Lake victoria while 420 acres are set aside for local community around Ratuoro area.

Rai’s decision to plant sugarcane in the farm comes months after Rai Group, linked to the family, was accused of importing contaminated sugar into the country.

The family boasts vast business interests and political connections in the country, which they may have exploited to bag the fertile land. The family’s representatives are taking stock of what is left in the swamp 10 month after Dominion’s exit after an auction of movable property to offset salary arrears and pay suppliers.