CONTRACT FARMING This Agreement made at ANTSOHIHY, SOFIA Region on this 26th day of January, 2009 between VARUN AGRICULTURE SARL, located at Building Assist, 2nd Floor, Ivandry, Antananarivo - Madagascar, represented by Mr. Tapas Kumar Bodak, Country head, hereinafter called as “VARUN AGRICULTURE SARL”, wich expression shall, unless repugnant to the context or meaning therof, include its successors and assigns, of the ONE PART AND : The 13 different plains

The Owners of the land formed an Association called “The Association of Persons”, who are authorised holder of the Land in the SOFIA Region (details are given at some other place in the agreement), have agreed to give the land to the VARUN AGRICULTURE SARL for cultivation or related activities for producing rice, corn, wheat, pulses, fruits and other ingredients.

BRIEF BACKGROUND OF THE PROJECT :

According to the contents of the following agreement:

NOW THIS AGREEMENT WITNESSETH AND RECOTDS THE TERMS AND CONDITIONS OF SUCH as under :

Obligations and Responsibilities of “THE ASSOCIATION OF PERSONS”:

Association of Persons is an association of lawful land holders in the SOFIA Region and have agreed to the following:

DURATION OF THE AGREEMENT

The duration of this present agreement will be 50 years, unless VARUN AGRICULTURE SARL agreed to determinate the same and can be extended for a period of 99 years subject to the progress of the project and mutual agreement.

The land owners, the Association, members of the association and the SODHAI have agreed to keep all the information end details as stricty confidential and shall not be disclosed to any party in between or to the third party in any circumstances, as it may directly or indirectly affect the working of the VARUN AGRICULTURE SARL

It is agreed between the parties to the agreement that all rights and ownership on the produce, equipments, brands, projects, and the marks will be that of the VARUN AGRICULTURE SARL and no other party (parties) including the owners, the association, members of association, and the SODHAI shall not claim for any of the rights on above otherwise.

In the event that not agreement is reached within 60 days after the date of notification of the dispute will be resolved through arbitration in accordance with the prevailing and applicable arbitration laws and rules of Madagascar andt the courts in Madagascar in the region where dispute arises shall have the jurisdiction to such disputes;

This agreement and the rights duties of the Parties arising out of this agreement shall be governed, contrued, interpreted and given effect to in accordance with the laws of Madagascar.

IN WITNESS WHEREOF VARUN AGRICULTURE SARL and the Members of the Association have hereunto set their hands and seal the day and the year first above written. 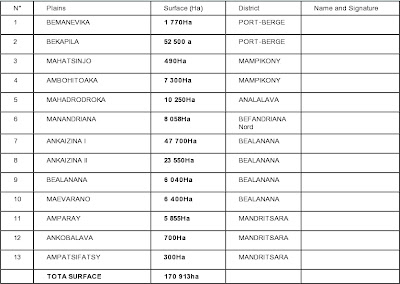