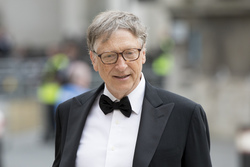 By Sophie Alexander  and Tom Metcalf
Bill Gates spent $171 million to buy 14,500 acres of farmland in Southern Washington, the most expensive U.S. land sale so far this year, according to the Land Report.
The Microsoft Corp. co-founder bought the property last month from John Hancock Life Insurance Co., which paid $75 million for it in 2010, the magazine that focuses on land investing reported. The purchase includes about 10,500 acres of irrigated farmland, 3,900 of rangeland and about 140 in an area known as Horse Heaven Hills.
The deal involved several layers of corporate buyers, the publication said. One of them, Louisiana-based Angelina Ag Co., shares the same corporate mailing address as Gates’s Cottonwood Ag Management in Kirkland, Washington, the Land Report said, citing a story in the Tri-City Herald.
Gates’s net worth is estimated at $98.9 billion, making him the world’s second-richest person, according to the Bloomberg Billionaires Index. Liberty Media LLC Chairman John Malone tops the Land Report’s annual ranking of America’s largest landowners with 2.2 million acres, followed by Ted Turner and the Emmerson family with 2 million acres each.
Prior to last month’s deal, the largest U.S. land purchase this year was the Investment Corp. of Dubai’s $136 million acquisition of the 38,453-acre El Maximo Ranch in Florida in April, according to the story.