Indian company to invest in poultry sector in Kazakhstan 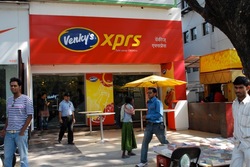 The Indian poultry company Venky's intends to invest in Kazakhstan's Turkestan Province, and will be assisted by government authorities in matters of land and infrastructure.
MENAFN | 26 September 2018
Indian company to invest in poultry sector in Kazakhstan
Baku, Azerbaijan
Large Indian company Venky's, providing poultry meat to 90 percent of the Indian market, intends to invest in Kazakhstan's Turkestan Province.
The issue was discussed at a meeting of Turkestan's akim (head of the local government) Zhanseit Tuimebayev with the representatives of Venky's.
During the meeting, the head of the province noted that there are all opportunities for the development of agriculture in the province.
"The authorities of Turkestan Province are ready to support the development of poultry farming and the creation of a cluster. Investors will be assisted in matters of land and infrastructure. I think that bilateral projects will be useful both for India and Kazakhstan. We are ready to work together," Tuimebayev said.
According to its director general, the company has joint ventures and projects not only in India, but also in the US and Europe.
If the talks conclude successfully, Venky's is ready to start operation in Turkestan Province, the director added.
It was also mentioned that the Indian company plans to implement joint projects with Ordabasy Kus LLP and Shymkent Kus LLP.