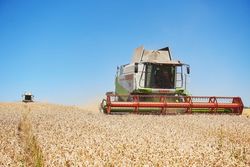 Saudi Arabia’s state-run Salic is nearing a deal to buy Mriya Agro Holding Plc, which would take the Salic-operated farming area in Ukraine to just over 200,000 hectares.
Bloomberg | 11 September 2018

By Isis Almeida
The Saudi Agricultural & Livestock Investment Co. is close to acquiring a farming company in Ukraine, a grain-producing powerhouse in the Black Sea region, according to people familiar with the matter.
The U.K. unit of Saudi Arabia’s state-run Salic is nearing a deal to buy Mriya Agro Holding Plc, which grows crops including wheat, barley, corn and potatoes in western Ukraine, said the people, who asked not to be identified because the information is private. The acquisition would take the Salic-operated farming area in Ukraine to just over 200,000 hectares (494,000 acres), they said.
Officials at Salic’s headquarters in Riyadh couldn’t be reached for comment, and Mriya Chief Executive Officer Simon Cherniavsky declined to comment.
The acquisition efforts come about five months after Salic appointed Matthew Jansen as its CEO, highlighting the company’s growth ambitions. Jansen was previously CEO of Cofco International Ltd., the trading arm of China’s largest food company, and is well-known for his appetite for deals.
Expansion Plans
Ukraine is Europe’s largest corn producer, and Saudi Arabia is the world’s top barley buyer. The fertile soils of the Black Sea region and the area’s easy access to top grain and oilseed importers in the Middle East have drawn Salic’s interest. The company teamed up with United Arab Emirates-based Al-Dahra Holding last year to invest in grains and livestock in 10 countries in the region.
Salic already manages about 45,000 hectares adjacent to the farms run by Mriya, and the acquisition would create one of Ukraine’s largest farming operations, the people said. Mriya has just completed a $1.1 billion debt restructuring after creditors including BNP Paribas SA and Credit Agricole SA took over the company in 2015 and began consolidating its machinery, logistics and farmland while recovering assets they say the former shareholders sold illegally. The former shareholders haven’t publicly responded to those claims.
The Saudi firm has shown a willingness to expand in recent years. In 2015, it joined U.S. agribusiness giant Bunge Ltd. to buy a majority stake in the former Canadian Wheat Board to create G3 Global Grain Group. It was also one of the bidders for a 9.9 percent stake in Glencore Plc’s agriculture arm, people familiar with the matter said in 2016.
— With assistance by Sarah Algethami, and Agnieszka De Sousa