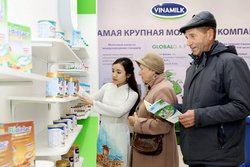 
Vinamilk invests US$19.7m in Laos firm
Vietnam’s leading dairy processor, Vinamilk, has spent nearly US$19.74 million acquiring a 51% stake in Lao–Jagro Development Xiengkhouang Co., Ltd, which is headquartered in Laos’ Xiengkhouang Province, aiming to develop a complex of hi-tech beef-dairy farms.
The investment plan, approved by Vinamilk’s board of directors, was handed to the State Securities Commission and the Hochiminh Stock Exchange on July 20. The total project value, backed by all shareholders, is approximately US$38.7 million.
The dairy processor’s representative noted that the Laos-based partner is a Japanese investor. Vinamilk will conduct the necessary procedures to facilitate the investment after the board resolves certain issues.
Addressing the 2018 annual shareholder meeting in late March, Mai Kieu Lien, Vinamilk’s general director, informed shareholders that the company had found a Japanese partner to build a certified organic dairy farm in Laos. The local dairy enterprise seeks to purchase fresh milk from the foreign firm to serve its dairy plant in Nghe An Province, which would take some six to seven hours for transportation, aiming to meet the surging demand for organic dairy products.
Also, it is set to open organic dairy farms at home and abroad, particularly in the center of Vietnam, for additional raw materials, so Laos is the right choice, thanks to its fertile soil and meadows as well as its short distance from Vietnam, Lien noted.
The local dairy processor officially became the second of its kind in Southeast Asia on establishing the joint venture with the Lao–Jagro Development Xiengkhouang Company. Earlier, in May 2016, it cooperated with the Angkor Dairy Products company, contributing 51% of capital to launch the dairy plant, named “Angkormilk,” in Cambodia, and then spent over US$10 million acquiring all the remaining shares in March last year.
Aside from Laos and Cambodia, Vinamilk also targets other thriving markets in the Southeast Asian region under the joint venture format, the representative added.
As of the end of 2017, Vinamilk had raised its ownership to 100% in three subsidiaries overseas: Driftwood Dairy Holding Corporation in the United States, Vinamilk Europe Spo’stkaz Ograniczona Odpowiedzialnoscia in Poland and Angkor Dairy Products Co., Ltd, in Cambodia. In addition, it holds a 22.81% stake in a joint venture with the Miraka Company in New Zealand, along with a Thailand-based representative office.
Vinamilk has made shipments of dairy products to 43 countries and territories, including tough markets that impose stringent requirements on product quality, such as Japan, the United States, Canada, Australia and New Zealand. It earned some US$200 million in export revenue last year.