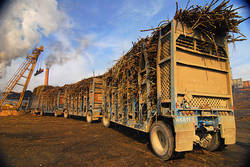 Brazilian agribusiness corporations, such as the sugarcane company COSAN, have created partnerships with pension funds in the United States, Canada, and Europe for the “outsourcing” of land operations that are analogous to the international outsourcing of labor. (Photo: Getty Images)
Latin American Perspectives | 29 June 2017


International financial capital stimulated the production of industrial agricultural supplies in Brazil during the foreign debt crisis of the 1980s. In the mid-1990s new finan- cial sources became available for debt rollovers, and this fueled a new cycle of industrial- ization in agriculture. This trend intensified in the years that followed, when commodity prices were high on the international markets. It led to an increase in the concentration of capital in agricultural assets such as machinery and land, which in turn generated a new cycle of indebtedness for agribusiness. This process of crisis accumulation was marked by the overexploitation of labor and predatory control over natural resources.