WIMBI, Ecuador — When Yessenia Padilla heard that her community crops were being destroyed, she and about 70 of her neighbors rushed out to intervene. They grabbed large boards, rocks, the machetes they use to harvest their fields, and took off yelling. She said that when they arrived, they saw workers from the oil palm company Energy & Palma ripping out their harvests with an excavator, with around 30 police officers protecting them.

“It was a lot. Like 30 [police], a car and two trucks,” Padilla told Mongabay, recounting the events in November of 2016 between the community of Wimbi and the Ecuadorian company Energy & Palma.

“As we were arriving, we were yelling, and then we put boards and rocks on the road so that the car couldn’t pass. They couldn’t get out. Then we said, ´It would be good that you left and don’t come back’.”

The workers and police did quickly leave, but they left behind the excavator, which the community then took back to town with them. The small town of some 400 people held the machine hostage for more than nine months to send the oil palm company a message: we’ll give it back if you fix the damages on our land and promise never to return. They returned the excavator after Energy & Palma filed a lawsuit against them for property theft.

Padilla said she felt rage when she saw her cacao crops being destroyed, what has long been the only form of income for her and her family.

“You have your work, or your home, and they just take it all away. How do you feel? Rage. It makes you want to cry,” she said. “It seems like we here in Ecuador don’t have rights. We’ve been here for years. My grandfather and my great-grandfather both lived here.”

According to Energy & Palma, one of the largest oil palm companies in the country, they bought the land back in 2000 from an intermediary and have the documentation to prove it. Legally, it belongs to them.

This conflict between Wimbi and Energy & Palma is only one part of a long ongoing legal battle between company and community.

But it highlights the complicated dynamics between the oil palm industry and the largely Afro-Ecuadorian population in Ecuador’s northern province of Esmeraldas – particularly in the district of San Lorenzo, where Wimbi is located.

Palm oil – the ubiquitous vegetable oil used in everything from food, makeup and even certain fabrics – has long been an important part of Ecuador’s agricultural economy. The country is the second largest oil palm producer in Latin America, and fifth largest in the world.

The region of Esmeraldas, a coastal province on the border with Colombia, recently became the most productive oil palm region in the country. According to 2017 oil palm census data released this year, Esmeraldas accounts for 45 percent of all oil palm production in Ecuador.

The majority of this growth has been around the southern city of Quininde, close to La Concordia, which has long been a production hot spot. The northern districts of San Lorenzo and Eloy Alfaro rank second and third, respectively, and both have seen major spikes in production since 2005, according to census data. As of the most recent palm oil census in 2017, San Lorenzo was devoting 22,641 hectares to oil palm cultivation, making it the second most productive area in the country.

“It’s the most important industry here,” said Wilson Aleivan Diaz, an oil palm specialist with the Environmental Management Unit in the municipality of San Lorenzo, adding that it provides at least 40 percent of all jobs in the region.

Flavio Paredes Ortega, the general manager of Energy & Palma, told Mongabay that they alone employ some 950 people in the northern Esmeraldas, most of whom come from 13 local communities. This job creation also means that thousands of people are now eligible for social security, he added.

But researchers have questioned these economic benefits, since the region still has some of the highest poverty rates in the country. In the district of San Lorenzo alone, 85 percent of the population lives below the poverty line, according to the 2010 population census. This is well above the provincial and national numbers, which are 51 percent and 60 percent respectively.

Residents say San Lorenzo is also lacking in government investment, resulting in a dearth of infrastructure, schools and healthcare. According to the same census, 15 percent of all adults in the region of San Lorenzo were illiterate as of 2010 (compared to 6.8 percent nationally) and only 23 percent of households have basic services, which includes electricity, water, toilets, and garbage collection.

Ivan Ernesto Roa Ovalle, Sociology and Regional Integration Professor at the District University of Bogota, Colombia, says that the very jobs the palm oil industry provides communities also keep those communities in poverty. According to Roa, few other jobs are available since palm oil has long been the largest industry in the region.

“It’s structural,” Roa told Mongabay. “If people are looking for work, it’s given on the basis of exploitation. The oil palm companies report the numbers, that they are employing so many thousands of workers, but there are no figures of how much they are paying, or how they are paying it.”

Another major concern for Roa and other researchers is how the palm oil companies have been accumulating so much territory. Roa said that in many cases, they’re developing on ancestral lands. 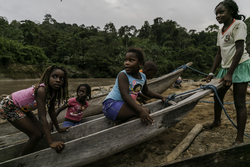 Ecuadorians of African heritage make up around 7 percent of the country’s population, according to census data, and the vast majority of these communities live in Esmeraldas, particularly in the north of the province. In the district of San Lorenzo, over 70 percent of the population is Afro-Ecuadorian and have long been fighting for their rights.

Many across the north don’t have formal land titles, as they are residents of communities founded in the 19th century by people fleeing slavery, escaping into remote jungle regions of Esmeraldas. Even after slavery was abolished, they continued to flee and build homes in these regions to avoid being re-captured, since they didn’t trust the new laws.

The lack of a paper trail has allowed both palm oil companies and the government to claim most of the land as vacant and use it for their own purposes, according to Italo Quintero, an analyst with the Legalization of Ancestral Territories Unit within Ecuador’s Ministry of Agriculture and Livestock.

The situation continues to be very complex, says Quintero, who was also born and raised in Esmeraldas and was part of the Afro-Ecuadorian movement in the 1990s that fought for land rights.

According to Quintero, Ecuadorians of African descent didn’t have rights in the country until the 1994 Agrarian Reform, which recognized their communities as “ancestral territories” and allowed them to claim land titles. These were then solidified in the 1998 Constitution and then again in the 2008 Constitution under articles 56, 57, 58, and 60, which state that ancestral territories are considered communal lands and thereby cannot be bought or sold.

Quintero said that even though many communities rushed to claim these rights, land continued to be bought – or simply taken.

A 2015 study conducted by John Herlyn Anton Sanchez at the National Institute of Higher Studies (IAEN) and Fernando Garcia Serrano at the FLACSO University in Quito and published in the journal Revista Colombiana de Sociología found that oil palm companies have employed several tactics in order to get the land they want, including buying the land through intermediaries, buying from the community directly, invasion, and using pressure and threats.

Buying from an intermediary was a common practice between 2000 and 2002, according to Quintero. This involves an outsider convincing a community member to sell them their land for a really low price, such as $15 to $20 per hectare. The outsider would then sell it to an oil palm company for a large profit.

“A lot of people didn’t have land titles, but they did have great needs and no development support from the state. So the moment that someone arrived to buy the land, they sold,” Quintero said. He explained that once there was a transaction with a community member, land titles were drawn up in the buyer’s name, giving them the legal right to sell or kick communities off the property.

Eventually conflicts began to arise as people caught on to this tactic, “but they were either assassinated or ignored, and there was no government authority that would solve this issue,” said Quintero, recounting his experience in the late 1990s.

According to researchers Anton and Garcia, Afro-Ecuadorian communities have lost over 30,000 hectares of ancestral land since they gained legal protection, mainly due to illegal actions of the oil palm industry.

Over the years, violence has also become more prevalent, with several armed groups operating in the region. They’ve been able to thrive, says Roa, because of the lack of security, state presence, and opportunities for local residents. In January of this year, the government declared a “State of Exception” in the municipalities San Lorenzo and Eloy Alfaro after armed groups attacked police and military posts, and kidnapped three journalists. This situation brought the land conflict in Esmeraldas to national and international stages, but locals say they have long been living in this kind of reality.

In 2017, a group of 40 organizations, including academic institutions and human and environmental rights groups, submitted a document to the United Nations Committee on the Elimination of Racial discrimination, denouncing the oil palm, mining and logging activities in Esmeraldas over the past decade. According to the document, these industries have created a “permanent panorama of emergency, violation of rights and systematic discrimination of Afro-descendent people and indigenous nationalities living in the municipalities of San Lorenzo and Eloy Alfaro.”

Despite these denouncements, the government continues to promote oil palm as an important source of growth for the country. This includes a recent government announcement to invest $1.2 billion in the industry’s future and provide tax breaks for oil palm exporters.

In Wimbi, the fight continues

Almost 20 years ago, a man named Miguel Egas reportedly bought the land where the community of Wimbi has been living for generations from one of its residents named Junior Bernabe Bravo Bennett. Egas then allegedly sold the land to Energy & Palma in 2000, which was then called Palmeras del Pacifico, according to Ortega, the company’s current general manager

“They have a document saying a man named Junior Bravo from here sold the territory,” said Wimbi community leader Roland Mina. “But that’s illegal, for one person to sell the community land. One. And the rest of the 400 people here?”

According to Wimbi residents, Energy & Palma didn’t make any serious advances on the territory for many years. Then, in 2015, it filed a lawsuit against the community for trespassing. According to legal documents Ortega provided Mongabay, Ecuadorian judges in the provincial court of Esmeraldas ruled in favor of the company in December of 2015 and ordered the evacuation of Wimbi residents. Ortega told Mongabay that, since then, the company has decided not to expand its plantation and will leave the region as forest, but they refuse to give up property rights.

The community is still trying to appeal the ruling and claim its ancestral privileges. Wimbi residents say that so far their appeals have not been answered – but they don’t consider their fight to be over.

“If the government won’t give us our land, we will defend it,” Padilla said. “They’re not going to enter our territory so easily.”