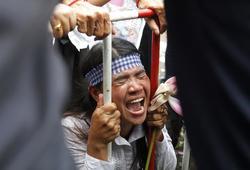 
“Tep Vanny has now spent two years behind bars on fabricated charges and should be released immediately,” said Phil Robertson, deputy Asia director. “This is just one of many outrageous cases in which the authorities have misused Cambodia’s justice system to harass and imprison peaceful land rights activists.”

Tep Vanny, 38, is a recipient of the 2013 Vital Voices Global Leadership Award for her efforts to defend the Boeung Kak Lake community from government land grabs and to demand respect for basic freedoms.

Since her arrest, Tep Vanny has been held at Phnom Penh’s Correctional Center 2. A week after her arrest, the Phnom Penh Municipal Court sentenced her to six days in prison on spurious charges of insulting a public official at one of the “Black Monday” protests to demand the release of wrongfully detained human rights activists. Having already served the six-day sentence in pretrial detention, Vanny should have been released, but was instead transferred back to prison based on a series of dormant charges reactivated by the prosecutor.

Previous reporting by Human Rights Watch concluded that in this and other criminal trials against Tep Vanny, the charges had no factual basis and were apparently fabricated. Trial judges did not require the prosecution to present evidence to substantiate the charges, unjustifiably disallowed testimony by defense witnesses, and arbitrarily rushed proceedings to prevent cross-examination of prosecution evidence.

In 2013, Tep Vanny joined protesters in front of Prime Minister Hun Sen’s house to peacefully call for the release of a detained fellow community member. Authorities arrested her but did not prosecute her at the time and let the case lie dormant.

However, after the government suddenly activated the case, the Phnom Penh Municipal Court convicted her on February 23, 2017, under article 218 of the criminal code for intentional violence with aggravating circumstances. The judge sentenced her to two and a half years in prison and ordered her to pay a fine of 5 million Cambodian riels (US$1,250). The court also ordered her to pay 9 million riels (US$2,250) in compensation to two security guards who alleged injury. On August 8, 2017, the Phnom Penh Court of Appeal upheld the ruling, as did the Supreme Court on February 8, 2018.

On February 23, 2017, state security officials kicked, shoved, and dragged activists who had gathered outside the courthouse, injuring two Boeung Kak activists and a pregnant woman. Video footage of the incident shows para-police chasing demonstrators into a neighboring mall, and guards repeatedly punching and kicking one of them with evident excessive use of force.

The authorities also prosecuted another long-dormant case against Tep Vanny, relating to her participation in a 2011 protest, but have yet to order her to serve the sentence. On September 19, 2016, the Phnom Penh Municipal Court convicted Vanny and three other Boeung Kak Lake community members – Kong Chantha, Bo Chhorvy, and Heng Mom – for obstructing a public official with aggravating circumstances and insulting a public official under articles 502 and 504 of Cambodia’s Criminal Code. The judge sentenced all four to six months in prison.

On February 23, 2017, the Court of Appeal upheld their conviction and sentence, as did the Supreme Court on December 8. However, the presiding judge of the Supreme Court has left the enforcement of the prison sentence to the discretion of the prosecutor, who so far has not acted.

Other affected land communities who had sought justice and engaged in peaceful activism have also been heavily harassed through arbitrary arrests, detention, and criminal prosecution. One of the more prominent examples is the Borei Keila community, whose activists were also at the forefront of and arrested in response to the Black Monday campaign. Authorities had arrested more than 38 Borei Keila activists by the end of March 2017.

The prosecution of Tep Vanny and other activists violates the rights to freedom of expression, association, and peaceful assembly, as well as the right to a fair trial, protected under the International Covenant on Civil and Political Rights, to which Cambodia is a party. These rights are also contained in Cambodia’s constitution.

“Tep Vanny’s plight should be at the center of demands by foreign governments and donors to the Cambodian authorities to immediately release all political prisoners,” Robertson said. “The government’s treatment of Vanny and other detained activists is a critical indicator of its engagement with the international community after the widely derided July elections.”