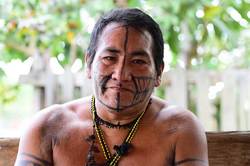 Up to 2.5 billion people depend on indigenous and community lands, which make up more than half of all land globally, but they legally own just 10 percent.

The right of indigenous people to land and territories is protected by international legal conventions including the United Nations' Declaration on the Rights of Indigenous Peoples, which was endorsed by hundreds of countries in 2007.

But campaigners say native groups are struggling with encroachment by governments and logging, mining and agribusiness companies.

"Financial interest in these lands is one of the big problems, along with racism and prejudice," Sarah Shenker, a senior campaigner with the rights group Survival International, told the Thomson Reuters Foundation by telephone.

As the world marks the International Day of the World's Indigenous Peoples on Thursday, here are some examples of hotspots where indigenous people face threats over the land they occupy.

- Brazil's Amazon rainforest: Rights groups say indigenous tribes in the region face death threats and arson attacks from illegal loggers and miners who encroach on their land. Some have been killed.

There are more than 100 "uncontacted" tribes in the region - the highest anywhere on the planet - who depend on large areas of unspoiled forest land to hunt animals and gather food.

- India's tiger reserves: Hundreds of thousands of indigenous people in India have been evicted from tiger reserves, as efforts to protect wildlife pits conservationists against local tribes, according to Survival International.

- Paraguay's Chaco tropical forest: The Chaco is home to many indigenous tribes that have long lived in the tropical forests and faces encroachment from ranchers and illegal loggers and has one of the highest deforestation rates in Latin America.

They include the Ayoreo community, which is believed to be the last remaining uncontacted indigenous group outside the Amazon basin.

While the Paraguayan constitution recognises the rights of indigenous people, they do not have the right to withhold consent for intensive agriculture projects on their customary lands, according to a 2015 United Nations report.

- Fighting for ancestral land in Malaysia: Indigenous people in Malaysia's Sarawak state have been protesting a proposed legal change that will require them to apply for recognition of ancestral domain and communal forests.

Dozens of disputes that have pitted indigenous Malaysian communities against logging and oil palm companies have ended up in court in recent years and several campaigners have been killed, according to rights groups.

- Reindeer herders in the Arctic: Mineral and energy extraction are threatening traditional ways of life in parts of the Arctic and creating tensions among its four million inhabitants.

They include the indigenous Sami people who have traditionally lived off herding and fishing.

The people of the Arctic region also top a list of populations vulnerable to global warming in a draft U.N. scientific report about the risks of climate change.