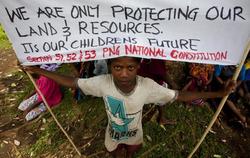 “In PNG we have more than 1 million local farmers who feed more than 7 million people every day, yet the government continues to allow foreign corporations to steal their land for logging and oil palm plantations” says campaign coordinator Eddie Tanago.

While APEC has long recognised the key role that food security plays in achieving quality growth and prosperity, ACT NOW! says in PNG rural famers are continually being robbed of their land.

“Despite Commissions of Inquiry, court rulings and numerous independent reports highlighting the injustice of state facilitated land grabs, the government has failed on its promises to protect rural communities and ensure their land is protected”, says Mr Tanago.

ACT NOW! says the most glaring example is the SABL land grab, in which over 5 million hectares of land was taken from rural communities.

ACT NOW! is also critical of the role corporations from other APEC countries play in Papua New Guinea’s land grabs.

“Almost all the logging companies operating in PNG are from Malaysia and 95% of the logs that are taken are exported to China. We would urge these countries to do more to stop the damage being done here”, says Eddie Tanago

ACT NOW! says the situation in PNG is only growing worse and there are regular reports from around the country of new forest clearance authorities being issued without the free prior informed consent of local people and even old Timber Rights that pre-date the 1991 Forestry Act reforms being renewed and extended.

“All these licences deprive local communities of land for farming and traditional food sources”.

“How is our government hosting an APEC meeting on food security when its own actions are so opposite to what APEC polices and declarations demand?”

“APEC must ensure its member economies are genuine about supporting and protecting food security and they should not be engaging in actions which only increase rural poverty and inequality”.