Video: The Bornean village chief dealing with the fallout from a corrupt plantation deal


Video: The Bornean village chief dealing with the fallout from a corrupt plantation deal 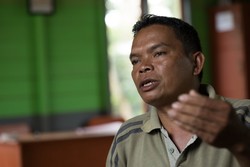 One afternoon in 2017, an indigenous Dayak man named Kardie tracked us down to a hotel in Kuala Kurun, a one-horse town in the interior of Indonesian Borneo. He had heard that our small team of reporters was investigating an oil palm plantation firm that was cutting into the forests surrounding his village, Tumbang Pajangei.

Kardie gave us the skeleton of his story: After being elected village headman, he discovered that his predecessor had signed a spate of documents allowing the company to annex a huge chunk of his community’s land. The revelation had come as a shock: Kardie and other village leaders had objected to the proposed plantation the few times they had been asked for their views. The permit had been issued by the head of Gunung Mas district, a man named Hambit Bintih, who had since been convicted for his role in a bribery scheme.

Kardie’s story was not unusual. Indonesia is home to hundreds of indigenous communities, but they tend to lack formal titles to the areas they inhabit, with the government treating them as squatters in their own land. After Hambit Bintih allowed the plantation firm to operate in Kardie’s village, chaos ensued, with some villagers resigned to accepting small amounts of compensation as others continued to resist.

The fate of Tumbang Pajangei is one small part of a larger story The Gecko Project and Mongabay investigated in 2017. Our article on Hambit Bintih’s licensing practices linked the land deals that affected dozens of villages in Gunung Mas to a bribery scandal that brought down not only Hambit Bintih, but also the chief justice of Indonesia’s Constitutional Court. The villagers, and their forest, were just collateral damage in a far bigger game.

The following day, at Kardie’s invitation, we visited Tumbang Pajangei to see for ourselves how the company’s activities were affecting village life. Watch our profile of Kardie, below, to find out more. Read our investigation, “Ghosts in the machine,” for the full story.