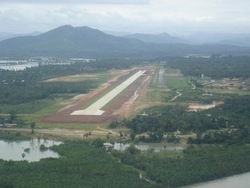 Reckoning with human rights violations in Thailand's extraterritorial investments
As Thailand’s investments across ASEAN increase, the country must commit to human rights due diligence that has been lacking.
By Wora Suk

The intensive growth of Thai investments in ASEAN countries in recent years has demonstrated significant potential opportunities to expand markets and provide access to transboundary supply chains, raw materials, as well as the natural resources of the neighboring countries. According to Thailand’s Board of Investments (BOI), Thai investments abroad totaled 13.3 billion Thai baht in 2016 ($399.4 million) The sharp growth of Thai investments in ASEAN countries has been supported by the acquisition of intraregional trade agreements, and market opportunities to invest with corporate tax exemptions such as Myanmar’s Dawei Special Economic Zone (Dawei SEZ), an investment by Italian-Thai Public Company Limited.

In the CLMV region (Cambodia, Laos, Myanmar, and Vietnam), the emphasis on infrastructure development, creation of special economic zones and industrial complexes such as Dawei SEZ, and energy sector investments such as hydropower dams and coal mines (for example, Ye and Hpa Anh coal by Toyo-Thai Power Myanmar Company) characterize Thai outbound investments. The energy sector has been heavily invested in to secure electricity supplies for Thailand’s economic growth. Thai investments include large hydropower dams on the Mekong and Salween Rivers, such as the Xayaburi and Mongton dams, respectively. Thai investments in Cambodia are dominated by the agricultural sector; a good example are the economic land concessions for sugar plantations (such as Khonkaen Sugar and Mitrphol).

Thai investments in ASEAN have intensified at a breakneck pace. But without mechanisms being put in place in Thailand and the neighboring countries to ensure compliance with international human rights standards, they have resulted in a wide array of human rights infringements.

Negative implications on the ground have included incidents such as land grabbing, forced evictions, and human rights violations via the practices of Thai investors. The practices have included discrete decisions, absences of accountability, inappropriate compensation, poor public participation, as well as the lack of compensation and responsibilities to provide remedies. Fundamental rights of the communities such as rights to food, health, and adequate housing have been abused, in part because of poor accountability of the investors to human rights due diligence.

Several complaints that communities have submitted to both judicial and nonjudicial channels demand justice, compensation, and remedies and raise the need to establish stronger enforcement and regulations on extraterritorial obligations of Thai investors. Extraterritorial obligations that respect human rights principles and community rights should be widely demanded as the minimum of compliance.

The Human Rights Liabilities of Thai Investments: On the Rise

In early April in a Thai court, two Cambodian representatives of 3,000 people impacted by land grabbing and forced eviction from Thai investment in Cambodia submitted a lawsuit against the Mitr Phol Sugar Corporation. It is the first lawsuit filed in Thai court to demand justice and remedies from a Thai investor operating abroad. Ma Okchoeurn from Oddarmanchey province in Cambodia became landless, her house was burnt down, and she was arrested for leading a protest against the company. This remarkable lawsuit was made possible because Mitr Phol has not opened to any negotiations toward compensation and remedies.

The case of Ma Okchoeurn from Cambodia — as well as 3,000 others who were forcibly evicted from their lands and became landless — resonates similarly with impacts from sugar plantations owned by Thai investors in other locales such as the case of Ban Chuang coal mine and Heinda tin mine in Myanmar and Dawei SEZ. In the case of Heinda, Myanmar Phongpipat Company (MPC) is the main investor. The local community raised concerns over environmental and social impacts that the mine has caused, such as sediment overflow in the rainy season and contamination of the river system and water sources of drinking water.

During the National Human Rights Commission of Thailand (NHRCT)’s visit and fact finding mission carried out in February 2018 with the communities living near the Myaung Pyo creek in Dawei, the overflow of sediments and toxic waste from Heinda was a major problem, which has damaged large areas of agricultural land and destroyed rice paddies, among other crops. The village’s main source of drinking water was contaminated by both sediments and toxins from mining extraction, such as manganese and lead. Communities filed a lawsuit against the company in 2014 demanding compensation and remedies.

The human rights footprint of Thais is on the rise, while outbound businesses are growing. A pattern of links between malpractice of businesses, environmental destructions and large displacements suggested a troubling track record of Thai investments in the Mekong region and Myanmar. The case of the Banchaung coal mine and Dawei SEZ in Tanintharyi region are illustrative.

Energy Earth PCL, East Stars Company, and Thai Asset Mining PCL are investors in Ban Chuang and the fourth company is Myanmar-based Mayflower Mining Enterprises Co., Ltd. In June 2017, communities affected by an open-pit coal mining operation at Ban Chaung filed a complaint to the NHRCT. Tarkapaw Youth Group and Inclusive Development International (IDI) have supported communities in lodging a complaint with the NHRCT. The complaint alleges several human rights violations suffered by local communities in Ban Chaung. According to IDI, the “mine is expected to harm 16,000 people living in 22 villages in the Banchauang area of the Tanintharyi region.”

In addition to environmental and social impacts caused by land grabbing and the operation of open-pit mining, serious health impacts have stemmed from spontaneous combustion of lignite, toxic fumes, and foul smokes from solid waste burning. The project has polluted local water sources that communities used for drinking, bathing, and cooking. The statements made by Ban Chaung communities demonstrated serious malpractices made by Thai investors in handling the environmental and social impacts associated with the mining and its operation; the companies failed in their duty to meaningfully consult with the affected people and carry out human rights due diligence.

While the mechanism to demand greater accountability from Thai investors and extraterritorial obligation is not fully developed, the recently embarked-upon project of Dawei SEZ is following in these poor human rights footsteps. Dawei SEZ is one of the biggest SEZs in Myanmar, including a deep seaport, a coal power plant, petrochemical factories, and the construction of a road that links Dawei to Kanjanaburi province (a border town in Thailand). The communities affected by land grabbing and human rights abuses have submitted complaints to the NHRCT and demanded compensation and remedies prior the project commencement.

Tuenjai Deetes, commissioner of NHRCT, who led the public forum and adheres to needs and recommendations from the affected communities, made the strong recommendation that:

Thai investors should comply with the human rights principles. Thailand’s commitment to UNGP marked a promising step for Thai investor[s] to comply with human rights standards and best practice on human rights due diligence. It is also the duty of the investor to respect community’s rights and their rights to remedies. NHRCT recommended that the companies work with communities towards fair treatment, just compensation and appropriate remedies


Based on comprehensive and well documented fact-finding and investigation of these projects by the NHRCT, the commission made recommendations to the Thai Cabinet and is pushing for the adoption of the United Nations Guiding Principle on Business and Human Rights or UNGP to guide human rights practices in Thai overseas businesses. By adopting UNGP in Thai businesses, it exhorts extraterritorial Thai investors toward greater responsibility to comply with human rights standards and due diligence in all outbound investments.


Thailand has embarked on an ambitious process of developing a National Action Plan on Businesses and Human Rights (NAP) since Prime Minister Prayut Chan-o-Cha declared business and human rights as a driving force of Thailand 4.0’s national agenda. A strong commitment to address human rights issues across business sectors in Thailand is a promising step under the junta government, as demonstrated in Prayut’s promise at the United Nations Conference on Business and Human Rights in Bangkok in May 2017 to enforce measures to tackling human rights abuses and improve human rights situations in Thailand.

The drafting of NAP has been designed to incorporate inputs and recommendations from several civil society organizations (CSOs) working across sectors such as labor and migrant rights advocates. CSOs such as the extraterritorial watch coalition of Thailand or ETO Watch Coalition, and EarthRights International have been engaging in the NAP development and its consultation processes. In March, communities affected by Thai investments have submitted their concerns on adverse environmental and social impacts to the representatives of the UN Working Group on Business and Human Rights. The UNWG made a final recommendation to Thailand that NAP process needs to be more inclusive and attentive to a diverse arrays of concerns from the communities. The NAP is scheduled to be officially launched by September 2018, but loopholes and gaps remain, particularly around remedies for affected communities, such as the case of Thai outbound investments in ASEAN.

The lack of transparency, accountability, and compliance to international best practices and human rights principles features largely in almost all Thai outbound investments in the Mekong region and Myanmar. A pattern of poor accountability and human rights compliance and business malpractice features even in newly begun Thai projects in the region. Tackling these issues and opting for more responsible regulations and laws for accountability should be a Thai priority. Thailand must ensure that the plan on business and human rights, which is currently under its development, includes a commitment of extraterritorial obligations. Urgent action is needed to protect against human rights abuses of the existing and planned projects.