Free economic zone “Bukhoro-Agro” to be created in Uzbekistan 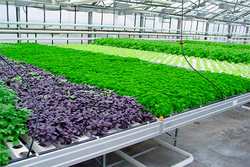 Free economic zone “Bukhoro-Agro” to be created in Uzbekistan
Tashkent, Uzbekistan -- The free economic zone Bukhoro-Agro is created in Uzbekistan. The free economic zone is being created in Bukhara region.
President of Uzbekistan Shavkat Mirziyoyev signed a resolution “On measures to create a free economic zone “Bukhoro-Agro” on 10 July 2018.
Modern greenhouse farms will be constructed in the FEZ, including with use of hydroponics technology based on cluster form. To create greenhouses, foreign and local investments will be attracted.
Within the framework of the project, production of structures, equipment and other components for the construction of energy-saving greenhouses will be established.
The FEZ will also create capacities for production, processing and export of agricultural products. The FEZ will also create a modern logistics infrastructure and nurseries for seedlings.
According to the resolution, the FEZ "Bukhoro-agro" will operate for 30 years with the possibility of extension. The FEZ participants will receive tax and customs privileges.
The projects on the territory of Bukhoro-agro will be financed from the funds of international financial institutions, initiators of projects, including direct investments, as well as loans from commercial banks and other sources.
At the same time, the size of the project initiator’s own funds cannot be less than 25%.


Bukhara-Agro free economic zone set up in Bukhara
President Shavkat Mirziyoyev signed a decree Tuesday setting up Bukhoro-Agro free economic zone (FEZ) in Bukhara province. The FEZ is expected to host local and foreign investment-based high-end greenhouse, as well as facilities for production of structures, equipment and other components for energy-efficient greenhouses.
Bukhoro-Agro will operate 30 years with the possibility of extension, with special tax and customs regimes valid on its territory. The status of the FEZ participant will be granted by the decision of the Administrative Council of Free Economic Zones and Small Industrial Zones of the Bukhara province.
The projects may be financed by international financial institutions, project authors, including through direct investments, bank loans and other sources. At the same time, the size of the project initiator's own funds shall not be less than 25%.
Original source: UzDaily
TWITTER
FACEBOOK
WHATSAPP
PRINT
E-MAIL
TWITTER
FACEBOOK
WHATSAPP
E-MAIL