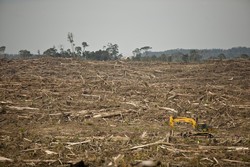 Executives of palm oil giant Wilmar resign a week after Greenpeace report
By Tim Daubach
The co-founder of the world’s largest palm oil trading company Wilmar International, Martua Sitorus, and Hendri Saksti, Wilmar’s country head for Indonesia, have resigned.
The decision was announced on Tuesday, about a week after non-governmental environmental organisation Greenpeace issued a report that exposed Sitorus’ links to Gama Plantation, a palm oil business that Greenpeace accused of destroying rainforest twice the size of Paris in Papua, Indonesia.
Set up by Sitorus and his brother Ganda in 2011, Gama is managed by senior Wilmar executives and members of Sitorus’ family, including Hendri Saksti, according to Greenpeace International’s press release on 25 June.
The allegations come almost five years after the agribusiness giant committed its entire operations worldwide, including subsidiaries and third-party suppliers, to an ambitious ‘no deforestation, no peat, no exploitation’ (NDPE) policy, responding to increasing pressure from environmental organisations such as Greenpeace International and The Forest Trust.
An effort to clean up its supply chain, the NDPE policy was just one among several industry-first sustainability-linked initiatives Wilmar launched in recent years, many of which were much welcomed by environmental groups.
In 2015, the company was the first in the sector to disclose the names and locations of its suppliers in its palm oil supply chain in Malaysia and Indonesia in an attempt to raise transparency levels and tackle deforestation.
Last year, Wilmar announced a new policy to protect and provide education to children on its oil palm plantations. Only weeks later, it launched a sustainable finance deal with multinational banking and financial services corporation ING, being the first company in Asia to tie its financial obligations to sustainability-linked performance targets.
In its press release, Greenpeace claims that Wilmar had sold off its most controversial plantations to Gama in recent years in order to evade responsibility for environmental degradation and human rights violations.


Furthermore, analysis of trade data revealed that Wilmar continued to trade palm oil from Gama despite the knowledge that the supplier had been violating Wilmar’s NDPE policy, Greenpeace said in its press release.
“Our investigation has exposed Wilmar’s dirty secret,” said Kiki Taufik, the global head of Greenpeace Southeast Asia’s Indonesian forests campaign. “For years, Wilmar and Gama have worked together, with Gama doing the dirty work so Wilmar’s hands stay clean.”
“[The resignations] show that Wilmar is determined to blame someone else for its failings. This is not just about Gama or Martua Sitorus; it’s about Wilmar’s refusal to do what it takes to keep forest destroyers out of its supply chain,” Taufik said in the release, calling on Wilmar to demand its palm oil suppliers to publish concession maps in order to ensure their supply chain is clean and transparent.
Responding to queries by Eco-Business, a Wilmar spokesperson said: “We reaffirm our commitment to our NDPE Policy which was the first to be launched in 2013. Every case of non-compliance is reviewed and monitored closely.”
“Wilmar has, as of 20 June 2018, ceased sourcing from all suppliers allegedly associated with Gama as identified by Greenpeace, until they can prove to our satisfaction that they do not belong to Gama,” according to the spokesperson.
They also emphasised that three plantation companies that Greenpeace reported were linked to deforestation – PT Graha Agro Nusantara, PT Agrinusa Persada Mulia and PT Agriprima Cipta Persada – are not part of Wilmar’s supply chain.
Addressing the resignations, the spokesperson explained that Martua Sitorus and Hendri Saksti had already intended to step down in 2017, but were asked to retain their positions to ensure a smooth transition, adding: “In order to put to rest allegations of conflict of interest between Wilmar and Gama, Mr Sitorus and Mr Saksti have decided to bring forward their resignations [earlier].”
Following the resignations, Kuok Khoon Hong, Chairman and CEO of Wilmar, had personally written to Greenpeace on 4 July, addressing concerns over the company’s sustainable supply chain efforts and detailing its next course of action in strengthening the implementation of its NDPE Policy, shared the spokesperson.
“These [actions] include releasing publicly concession maps of suppliers that are in our grievance process, work with our stakeholders towards the protection and rehabilitation of remaining forests in concession areas and to have a more robust framework for verifying NDPE compliance at refinery level by the end of 2018,” they said.
Original source: Eco-Business
TWITTER
FACEBOOK
WHATSAPP
PRINT
E-MAIL
TWITTER
FACEBOOK
WHATSAPP
E-MAIL