Indonesia’s national commission on human rights has vowed to investigate the death of a journalist who was being held on charges of defaming a palm oil company owned by a powerful tycoon.

From November 2017 to March of this year, Muhammad Yusuf wrote at least 23 articles for the news portals Kemajuan Rakyat and Berantas News about a land conflict involving PT Multi Sarana Agro Mandiri (MSAM). The company holds the rights to develop a massive oil palm plantation in Pulau Laut, a small island off the coast of South Kalimantan province, in Indonesian Borneo. It is owned by tycoon Andi Syamsudin Arsyad, popularly known as Haji Isam.

Parts of MSAM’s concession are claimed by several other firms as well as by local farmers who accuse the company of bulldozing their crops to make way for its plantation. Yusuf covered this dispute. After MSAM reported him to the police, he was arrested on charges of hate speech and defamation, for which he faced up to six years in prison and a 1 billion rupiah ($72,000) fine if convicted.

Yusuf spent more than five weeks in police detention, before he was transferred to the custody of the Kotabaru district attorney’s office in early May to await trial, which began two weeks later, according to local media.

On the morning of June 10, Yusuf was taken to a local hospital after complaining of breathing difficulties and chest pain.

He died 30 minutes after arriving at the hospital. He was 42, and leaves behind a wife and two children.

In April, MSAM caught the national spotlight when Tempo, Indonesia’s leading investigative media outlet, published a series of articles on Haji Isam, focusing on MSAM and its dispute with a coal-mining company in Pulau Laut. The two companies’ concessions overlap, and MSAM was said to be protected by the police, while the mining company was linked to figures in the military.

In January, Governor Sahbirin revoked the mining company’s permits, prompting it to sue the government in a bid to reinstate its permits.

MSAM is also in conflict with local villagers, with Sawit Watch, an NGO that monitors the palm oil industry in Indonesia, reporting that it had cleared land in four villages — Semisir, Sungai Pasir, Salino and Mekarpura — to make way for its plantation.

Based on Sawit Watch’s report, which has not been published but which Mongabay has seen, the villagers weren’t properly informed of the company’s plan to expand into their areas since the company only talked to village heads and their subordinates.

“And when the company conducted land clearing on the locals’ areas, it was done with the use of police officers to intimidate,” Eep Saefulloh, a researcher with Sawit Watch, told Mongabay.

MSAM also neglected to negotiate with the locals when deciding on the amount of compensation to be paid by the company, according to Sawit Watch’s report. 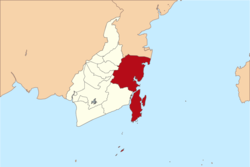 A map of Kotabaru district in South Kalimantan, which includes Pulau Laut. Image by Ewesewes/Indonesian Wikipedia.

Yusuf’s arrest and death have prompted activists and fellow journalists to take a closer look at the roles of the police, the company and the district attorney’s office in this case.

Sawit Watch sees Yusuf’s case as an attempt by MSAM to silence critics. Sawit Watch’s Eep points out that Yusuf was arrested at the airport in Banjarmasin, the South Kalimantan capital, as he was about to accompany a delegation of villagers to Jakarta to report the land conflict to the country’s human rights commission, Komnas HAM.

“He was arrested while he was at the airport,” he said. “So he’s being criminalized.”

The Alliance of Independent Journalists, or AJI, a group that promotes press freedom in Indonesia, criticized the police’s decision to pursue criminal charges against Yusuf. Under Indonesia’s 1999 Law on the Press, it is the editor-in-chief of a publication who bears the main responsibility for any news published by their outlet.

AJI also said the criminal charge was unnecessary. “Even if the mechanism [to solve biased reporting] as laid out in the press law has been taken and deemed to be inadequate, the next step could be a civil lawsuit,” AJI said in a press release. “Not a criminal charge that could send someone to jail for what he’s writing.”

Others question the circumstances surrounding Yusuf’s death, with his wife and the police giving conflicting statements regarding his health.

Arvaidah, Yusuf’s wife, told news site Tirto.id that her husband had suffered from stomach and heart conditions since 2012, and had had a stroke. She said he was required to undergo routine checkups every month at a local hospital.

While in custody, Arvaidah said, Yusuf’s health began to deteriorate. She asked the police to release him, but to no avail.

She made the request again after Yusuf was transferred to the custody of the Kotabaru district attorney’s office, but the prosecutors also refused.

Once Yusuf’s trial started at the Kotabaru District Court, Arvaidah repeated her request, this time to the court. The panel of judges granted her wish and Yusuf spent three days at Kotabaru General Hospital before being returned to custody.

After the trial resumed, Yusuf’s condition started worsening again, prompting Arvaidah to plea to the court again. But this time, her plea fell on deaf ears.

Surya Mifta, the chief of detectives at the Kotabaru police department, said the police were well aware of Yusuf’s health condition. However, they decided against a medical release during the five and a half weeks Yusuf was in their custody, because he “wasn’t being cooperative” during the investigation, Surya said as quoted by Tirto.id.

Surya also refuted Arvaidah’s claim about Yusuf needing to have a medical checkup once a month. He said a doctor only advised Yusuf to take medication once a week.

Surya said Yusuf was healthy while in police detention, as he routinely took his medication and was often reminded by officers to do so.

The district attorney’s office, under whose custody Yusuf died, also denied any wrongdoing, saying he was refused medical release because prosecutors were afraid he would try to destroy evidence and escape.

“There are some things that are quite strange in this case,” Komnas HAM deputy head Hairansyah said as quoted by Tirto.id. He said Yusuf’s family planned to visit the commission, and that he would “pay special attention to this case.”

He added that the Kotabaru district attorney’s office would have to explain the full details of Yusuf’s death, in light of his medical history and the series of “irregularities” cited by the family.

Arvaidah said she was prevented from seeing her husband’s body at the hospital during the autopsy.

“The medical officers said I wouldn’t be strong enough to see the dead body,” she said as quoted by Tempo.co. “So I just waited outside the room. Meanwhile, the police and the prosecutors were allowed to enter the room. But I had to wait outside. That was strange.”

The hospital also refused to give her a copy of the autopsy report, saying she would have to request it from the police. “They said the family of the victim didn’t have the right [to the report], only the police had the right,” Arvaidah said.

She said she strongly suspected that her husband had died an unnatural death, and said she was considering suing the police and the district attorney’s office.

Handwritten notes obtained by Tempo.co and believed to have been made during the autopsy cite extensive bruising on Yusuf’s body, including on the back of his neck, his shoulders, back and thighs. Police have denied that the autopsy found any signs of violence on the body.

The case that led to the journalist’s arrest and death, meanwhile, has not escaped wider scrutiny.

“Please stop this company,” a local named Eko, whose rubber plantation was cleared, said at a meeting with Komnas HAM in April, as quoted by Tirto.id. “If this goes on, and we let down our guard, they’ll bulldoze our fields. That’s been the pattern all along.”