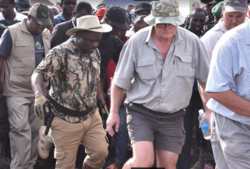 Ayade’s Agric revolution excites S/African farmers, partner Cross River on feed mill
Cross River State Governor, Professor Ben Ayade has reiterated  his committment to disentangle the state from over dependence on oil-induced federal allocation by investing heavily on agriculture as alternative to oil.
The governor  spoke at the weekend when he led a team of South African farm experts on irrigation, agronomy, hydro and solar electricity to Ochong in Obubra Local Government Area of the state on a site inspection for the establishment of a feed mill and soya bean farm.
Decked in a brown combat short, camouflage polo and bowla hat to underscore the importance of the inspection, Ayade who also had the Ambassador for Food Security in Africa, Dr Brylyne Chitsunge, on his entourage, said his administration intends to establish a yellow maize farm which will be the biggest in Africa.
“We are putting a yellow maize farm alongside Soya bean farm for a feed mill. We made a choice of this land as an administration as we are setting up a poultry farm to increase the protein intake of Nigerians and to focus on agriculture as an alternative to oil,” the governor disclosed.

According to him, “this will deal with issues of food security considering the increasing population of Africa, for if we do not do something about agriculture and our protein intake, definitely, the younger generation coming will be in trouble.”

Governor Ayade explained that Cross River was ready to go into full agriculture industrialization as the only way to guarantee prosperity, put food on the table for all as well as keep the young men and women busy.

The governor who reiterated his call on Cross Riverians to take to farming as the most sustainable way wealth creation, said “in today’s modern world, farming has gone digital, so the technology that is going to be deployed is such that you are not going to be toiling, you are going to use your brain, press some equipment and get the best of harvest.”

On the choice of the land, he said: “It looks very promising and very hopeful. It was selected based on history and preliminary data,” adding that, “I am sure by the time the experts are done, they will give a final opinion, but it looks very good.”

Chitsunge, on her part lauded the governor for taking agriculture to a higher pedestal, assuring that her office will support the state’s initiative while ensuring that “anything you do in Cross River will be replicated in the entire nation and indeed Africa.”

The Ambassador who stressed the need to add value to farming as the clothes and food people wear and eat would not have been possible without agriculture, urged youths to “come on board and take ownership of food security as well as build their economy.”

Dale Van Den of Aardway Chansbury Farm in South Africa who was also on the inspection team expressed joy at visit to Cross River and promised a robust  partnership, saying “together we are going to strive for the best. We have the expertise, so as we go forward, we will do the soil analysis, investigate and check the climate as well as other possibilities involved for massive production in this land.”

Others, including an irrigation expert, Luan Marais of Senter 360, South Africa and Electrical Engineer , Koos Mostery, assured that they will carry out proper planning and approved soil analysis to boost food security in the state, nation and Africa at large, pointing out that, “the gesture by the governor will create jobs for the teeming unemployed youths.”

Earlier in his remarks, Head of Local Government Administration for Obubra, Chief Barry Alamo Inyang, lauded Ayade for the decision to site a maize farm and feed mill in the area, a development, which he says will assuage the people who have been neglected by past administrations in the state.