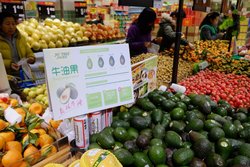 Global AgInvesting | 8 June 2018
US-based Mission Produce is developing its first domestic avocado farm in China
Mr. Avocado, the first branded avocado on the Chinese market launched by U.S.-based Mission Produce with Chinese importer, Lantao, and Chinese fruit retailer, Pagoda, announced the launch of the farming operation. Located in Yunnan in the southwest of the country, the farming project will operate under the business name, Yunnan Avocado Agriculture Development Limited, and with an eventual goal of building out a fully integrated supply chain, this initial farming operation will grow seedlings and produce avocados, which it will then process, store, and market.
Founded in 1983 in Oxnard, California, by produce industry veterans Steven Barnard and Ed Williams, Mission Produce was built on the observation of the growing popularity of avocados on the U.S. market. Since its inception, Mission has grown into a global player with operations in the U.S., Mexico, Peru, Chile, New Zealand, Canada, and the Netherlands, according to the company website.
On the Fast Track
Mission’s tie-in with the Chinese market began only in 2015 when the company exported its first container of fresh avocados grown on one of the company’s farms in Peru to the Chinese port of Shanghai in September of that year. Once Mission gained this access to the Chinese market, the company partnered with Lantao and Pagoda to grow its business on the ground.
In April 2017 Mission announced both the launch of the Mr. Avocado brand and the opening of a new avocado ripening facility in Shanghai.
“We are very excited about the growth we’ve seen in China over the past several years,” said Steve Barnard, president and CEO of Mission Produce at the time. “By opening the Mr. Avocado Ripe Center in Shanghai, we will be able to provide ripe fruit to the market and accelerate that growth.”
By March of this year the partners announced their agreement to build a second ripening center in southern China.
“After opening the first ripening center in Shanghai, we experienced strong demand from Southern China. This new center will give us the opportunity to supply this region,” said Qidong Zhu, general manager for Pagoda.
Butter Fruit
As avocado sales in the U.S. continue to climb by between 10 and 12 percent per year, the avocado’s reputation as being a heart-healthy, fresh option is driving up demand from China’s growing middle class, reports CNBC. And expectations are that sales across the country could double this year.
“Avocado has evolved into a trending ingredient worldwide and has particular resonance in China, where it’s commonly known as butter fruit due to its somewhat exotic positioning,” according to market observer Technomic.
This demand in China is currently being fully met by imports, however supplies are often disrupted due to unforeseen issues in the world’s top producing regions of California, Mexico, and South America. And all partners behind the Mr. Avocado brand believe that the establishment of the Yunnan Avocado Agriculture Development Limited farming company will help stabilize local supply.
“The Chinese market has been growing at a very fast pace,” Ramon Paz, with the Avocado Producers and Exporting Packers Association of Mexico (APEAM), told CNBC in January of this year. “Our numbers show big growth but the total absolute numbers are still modest compared to other markets like the U.S. But of course the potential is huge.”
-Lynda Kiernan