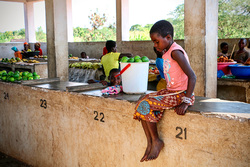 Mozambique won’t be Mato Grosso
A popular movement centred on a small farming village in northern Mozambique has, for the moment, halted an attempt to move to cash-crop monocultures mainly for export.


Investigating was not difficult: in the same newspaper article, Brazilian entrepreneurs said they were eager to set up operations in Mozambique, as they had been told they could rent land at very low rates. ‘Mozambique is a Mato Grosso in the middle of Africa, with free land, few environmental barriers and far lower freight costs to China,’ said Carlos Ernesto Augustin, president of the Mato Grosso Cotton Producers’ Association.
Whatever the story that was invented by GV Agro and repeated by ProSavana’s promoters, the Nacala corridor is not at all like the Mato Grosso cerrado. They may be at the same latitude, but the Nacala corridor is much more fertile, and therefore more important to local farmers than is the cerrado. And unlike Mato Grosso, which was sparsely populated in the 1970s, the corridor is home to more than five million people, most of them small farmers who produce a large part of the food eaten in Mozambique.
As in many African countries, land in Mozambique belongs to the state and cannot be sold. This prerogative, established at independence in 1975, is guaranteed by the 1990 constitution. In legal terms, the government grants communities or individuals the right to use and exploit land (direito de uso e aproveitamento da terra, DUAT), by farming machambas or small plots. But not everyone in rural areas has a DUAT document, whose importance is often underestimated, and land can change hands without farmers realising what is going on.
People who used to live in Wuacua, 15 minutes’ drive from Nakarari, are well aware of the problem. One day in 2012, district government officials came to ask the residents to sign documents. In return the residents were promised a sum of money and the construction of ‘social projects’. In reality, they were explicitly signing away their DUAT. Mepoteia said: ‘They were tricked. They were told they were taking part in a rural development programme, and were made to sign documents they didn’t understand. They got between 4,500 and 6,000 meticais [$70-95] in compensation and were told to move out.’
Soon afterwards, AgroMoz, a Brazilian-Portuguese joint venture involving a Mozambican company owned by former president Armando Guebuza, acquired a 9,000-hectare concession on which it mainly grows soybeans. ‘They took advantage of the fact that most of the population is illiterate and that few people understand Portuguese.’ The company has hired guards to keep people out, and Wuacua is now a ghost village, surrounded by AgroMoz’s soy fields. The earth is bare, waiting to be planted, in stark contrast to Nakarari, where there are little patches of beans and cassava, mango trees, and children running about.
A symbol of resistance
Though the AgroMoz scandal is not directly linked to ProSavana, it reveals the promoters’ intentions. The story of Wuacua has spread across the region by word of mouth; farmers’ representatives have learned from it and are defying the government. Mapoteia said: ‘Government officials called us to the district offices to discuss development. They gave us a fine presentation using a projector. We asked questions about AgroMoz, but they wouldn’t answer. So we walked out.’ The Mutuali district became a symbol of resistance, which over the months has spread throughout Mozambique and into neighbouring countries.
‘Everything started with a trip to Brazil,’ said Vunjane. After learning about ProSavana and how it was like what had happened in Mato Grosso 30 years earlier, the Mozambican organisations decided to go and see for themselves, and in November 2012 a delegation of five representatives flew to Brazil. They were shocked. Abel Saínda, of the Rural Association for Mutual Aid (ORAM) said: ‘All we saw, for hundreds of kilometres, was huge soya fields. No farmers, no villages. There are no trees, and there is no animal life, because heavy use of pesticides and fertilisers has turned the area into a desert.We were horrified to think that our home could become an empty wasteland like that.’ A documentary based on the trip, dubbed into local languages, has been shown throughout Mozambique (9).


Costa Estêvão, head of the Nampula branch of the UNAC was harshly critical of the government: ‘Nobody was telling us anything, so we decided to take action. We are not against development, but we believe farmers must be involved and consulted. But they drew up a complete plan without telling us. Then they tried to push it through. They were talking about rural development, but they were taking land away from people who had been farming it for decades.’ He worked steadily as he spoke to me, digging holes in the ground with a hoe and planting maize on his machamba, half an hour’s drive from Nampula. ‘When we finally saw the master plan, we realised it was a total rip-off.’ The plan, drawn up by GV Agro and Japanese consulting firms, Oriental Consulting and NTC International, talked of ‘[pushing] farmers out of traditional shifting cultivation and land management practices into intensive cultivation practices based on commercial seeds, chemical inputs and private land titles’ (10).
The resistance movement grew rapidly. In Brazil, Japan and Mozambique, farmers’ organisations and NGOs shared information and coordinated their actions; 23 Mozambican organisations wrote an open letter to the Japanese, Brazilian and Mozambican governments denouncing the ‘total absence of a deep, broad, transparent and democratic public debate ... on a matter of great social, economic and environmental relevance with direct impact on our lives’ (11). Forty-three international organisations co-signed and circulated the document. Estêvão travelled to Tokyo. ‘I was invited to meet Japanese politicians.I told them we were criticising ProSavana because it was a threat to our way of life.’
The demonstrations, the overseas missions, the open letter and the surge of popular feeling bringing Mozambican and Brazilian farmers’ organisations together with Japanese and European civil society organisations all helped to undermine the programme. Vunjane said: ‘The protests spread to every part of Mozambique. We organised publicity tours to inform local communities and urge them not to believe the empty promises of government officials. It was hard work. We covered enormous distances. But the result was fantastic: for the first time, the Mozambican government had to listen to the people, who told it loud and clear that they wouldn’t accept a model for development that was imposed top-down.’
‘A gross error of judgment’
The promoters of ProSavana started to back down. The Japanese, anxious not to be seen as the agents of a new agrarian colonialism, were the first to express doubts as to the programme’s relevance. The Brazilian entrepreneurs who had visited Mozambique at the invitation of GV Agro announced they were no longer interested in investing. The Brazilian Cooperation Agency’s technical experts went home. The Nacala Fund was closed down, and ProSavana is now suspended.
‘We made a gross error of judgment,’ said Hiroshi Yokoyama, responsible for ProSavana at JICA. At JICA’s modern offices in central Maputo, he admitted that no feasibility studies had been conducted. ‘At the start, we thought it would be possible to reproduce the Mato Grosso experiment. Then we realised [Nacala and Mato Grosso] were very different, and that it wouldn’t be appropriate to apply the Brazilian development model here.’ Yokoyama now talks of a need to support small farmers and rejects all large-scale agriculture, though that was central to ProSavana. ‘We are now rewriting the master plan to include a system for consulting the rural communities concerned.’ GV Agro is no longer part of the process. The promoters say they have learned their lesson and want to go back to square one.


Nearly a decade after its official launch at L’Aquila G8, ProSavana seems to have ended before really getting started. Japan has invested too much money to withdraw without losing face, but Brazil has already packed up and gone. The Mozambican government, which dreamed of turning the country into a hub for African agro-industry, is left with a mere cooperation plan that is still on the drawing board, and in which it seems to have lost faith.
A visit to the agriculture ministry reveals how far ProSavana has been downgraded. Once intended to be Africa’s biggest-ever agricultural development programme, it has been relegated to a bare office, without computers or telephones, in a minor wing of the ministry. Mozambique’s national coordinator for ProSavana, Antonio Limbau, sitting at a desk decorated with miniature Japanese and Mozambican flags, had the unenviable task of denying the obvious truth: ‘We never wanted to import the Brazilian cerrado model. We always intended to promote a model for rural development that was right for conditions in this country, favouring small, medium and large enterprises. Our priority is the food sovereignty of our people.’ He insisted the programme would go ahead ‘despite delays and misunderstandings.’
In the Nacala corridor, ProSavana has become a ghost. In the far suburbs of Nampula stands a soil analysis laboratory, one of the few elements of the plan to have been completed. In this lonely and largely empty building, a few students and an agronomist offered to demonstrate their equipment, without much enthusiasm. Americo Uaciquete, in charge of ProSavana in Nampula, recited the official line: ‘The programme is perfectly fine, but it was misunderstood. Everything is frozen at the moment.’
Under the mango tree in Nakarari, you only have to mention ProSavana to see the villagers’ faces darken with anger. ‘Even if they come a thousand times, they’ll never win us over,’ said Mocernea. Vunjane, though delighted with the historic victory, was more cautious: ‘The government has changed its tune. But we need to stay on our guard, because it will try again.’