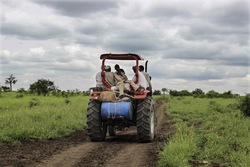 About 500 farmers were left landless when the Sudanese government grabbed it to establish the Habilla Agricultural Project, ignoring their inheritance rights and claiming they had not paid their ‘ownership renewal fee’. (Photo: Ayin)
Mail & Guardian | 4 May 2018