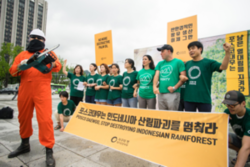 Daewoo's overseas agribusiness expansion
Ten years ago, headlines around the world reported the shocking news that a subsidiary of Daewoo Logistics called Madagascar Future Enterprise Corp., was negotiating a 99-year lease with the government of Madagascar for 1.3 million hectares of arable land – almost half of the country’s arable land. Their plan was to grow corn and oil palm in four regions of the island for shipment back to South Korea to produce animal feed and biofuel respectively. Today, far from the 1999 bankruptcy of Daewoo Motors, South Korea’s Daewoo is one of world’s largest transnational conglomerates and continues to expand a business empire that extends from manufacturing and trade to natural resources like oil and gas, minerals and food.
In 2010, after it merged with POSCO, one of South Korea’s biggest steel companies, Daewoo International began cooperating with the Korea Rural Community Corporation, a public enterprise established in 2000 to develop an overseas food supply for South Korea. In September 2011, Posco Daewoo launched into the oil palm business in Indonesia targeting initial investments in the politically conflictual area of Papua. Since then, the amount of oil palm plantations operating in Papua has increased at a staggering rate. Before 2005, there were only seven plantations operating in the area. In 2014, more than 21 oil palm companies were operating there and around 20 other companies were in the late stages of getting permits to join in. [1]

On its website, Daewoo states that it has a large-scale oil palm concession area of 34,195 ha, plus facilities, under its subsidiary PT Bio Inti Agrindo (PT BIA) in Papua. The goal is to complete planting by 2018, and work further to build a business of producing and selling edible oil products. But evidence from the ground shows that Daewoo controls a larger land area for oil palm plantations than what is publicly announced on its website. The multinational actually controls 36,401 ha. Operated by PT BIA, the oil palm plantation is located in Papua’s Merauke district and started operations in 2012. [2]

Problems in Papua…
Numerous complaints have been filed against Daewoo’s subsidiaries in Papua. In their sustainability report, PT BIA claims to be compliant with Indonesia’s no-burning laws by prohibiting burnings during ground-leveling activities. [3] But local communities and the Global Forest Watch (GFW) have been reporting otherwise. Evidence gathered across Indonesia by GFW during the massive forest fires of 2015 shows concentrations of fires around and inside PT BIA’s oil palm concession. [4] 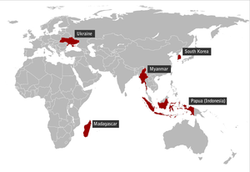 Map showing the countries where Daewoo’s agribusiness projects are operational.In addition to illegal fires, others have pointed at Daewoo’s failure to fulfill its obligations vis a vis evicted communities. The multinational is also critised for not complying with requirements to report on labour conditions in the plantations. Since 2012, PT BIA has been clearing forest in an area called Iltadeh in Ulilin, in Merauke district, without any consent from the Mahuze Kewam indigenous community who owns the land. The company claims it paid Rp 375 million (around US$ 26,000) but the payment was made to people from another village who do not own the land. PT BIA then gave a Rp 92,400 (around US$ 6,400) compensation to the Mahuze Kewam community and promised another compensation – but without any contract referring to the land area, how long the concession would remain in place, nor the value and schedule of the compensation payment. These promises were never fulfilled. [5] Further, in 2015 and 2016, there were several reports from the community of violent acts from military officers securing the PT BIA plantation area. The security officers shot towards villagers after they blocked the entrance to the plantation.

…And in Madagascar
PT BIA was founded in 2006 with headquarters in Jakarta, in Indonesia and, since 2011, it operates as a subsidiary of Daewoo International Corp. PT BIA has networks and operations in Madagascar, [6] with key Posco executives such as Oh-Joon Kwon, its CEO and President, also running PT BIA. This indicates that Daewoo is still interested in agribusiness activities in Madagascar via its Indonesian subsidiary, in line with an earlier report from 2013. [7] According to TANY, a Malagasy land defenders organisation, the fact that South Korea set up an embassy in Madagascar in July 2017 confirms the government’s intent to see the project revived. The 2013 report also pointed to strong links between the Daewoo group and the South Korean government. Therefore, the TANY collective wrote an open letter to Korea’s Ambassador to Madagascar, Kim Kwon-il, in January 2018 [8] inquiring about the 2008 farming project and any quid pro quos arising from the many South Korean “gifts” to and investments in other projects in Madagascar whether in mining, agriculture, fishing or renewable energy.
Sourcing food in Ukraine and Myanmar
Daewoo’s agribusiness expansion does not stop with farm-based activities. The company maintains its core business in trading and is moving to secure grain distribution facilities including silos, export terminals, grain processing facilities and rice processing complexes for four major food commodities: wheat, corn, soy and rice. Daewoo became member of the Grain and Feed Trade Association in 2015, and the Federation of Oils, Seeds and Fats Associations in 2016, to further consolidate its business in food trading.
The multinational has two major grain processing facilities, one in Myanmar and the other in Ukraine. Myanmar has been key for Daewoo’s business expansion, ever since the company recovered from its 1999 bankruptcy and discovered an offshore gas field in the country in 2004. In 2017, Daewoo won the approval from the Myanmar government for the construction and operation of a rice processing complex.