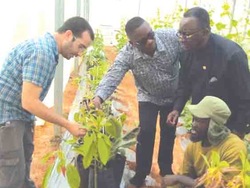 Dr Owusu Afriyie Akoto (2nd right) gets an explanation on avocado grafting at the Agro Studies demonstration farm in Tel Aviv, Israel.
Business Ghana | 14 May 2018
Agric Minister seeks investment in avocado
The Minister of Food and Agriculture, Dr Owusu Afriyie Akoto, has impressed on the Israeli business community to take advantage of the favourable business environment in Ghana and invest in the county’s agricultural sector.
His invitation was directed particularly at investors interested in the cultivation of avocado.
He told the Israeli business community that the government of Ghana had set aside large hectares of land for the cultivation of the crop and urged Israeli businessmen interested in the offer to take advantage of the opportunity.
Dr Akoto made the request during interactions with some members of the Israeli business community at the 20th International Agricultural Exhibition and Conference dubbed “Agritech Israel 2018” in Tel Aviv, Israel, last Tuesday.
Agritech Israel 2018
The exhibition focused on the unique challenges the world was facing in the face of global warming, climate change, water scarcity and other factors that are contributing to increased desertification.
On display were agricultural implements, machinery, irrigation equipment, soil technology and modern methods of breeding animals such as cattle, sheep and goats.
There were also new hatchery methods and machinery, animal feeds and other modern farming methods, as well as stands that displayed research findings, modern agricultural technology and other discoveries for combating desertification and turning arid and semi-arid areas into arable lands.
It was attended by experts, researchers, agronomists and farmers who brainstormed and applied themselves to new research findings with regard to reaching a durable solution for agricultural sustainability, especially in arid and semi-arid areas of the world.
Dr Akoto was accompanied to the conference by Ghana’s Ambassador to Israel, Mrs Hannah A. Nyarko, and the Coordinator of the Youth in Agriculture and Aquaculture Programme, Mr Klutse Kudomor.
Avocado
Avocado is a highly-sought-for fruit on the world market and is highly patronised in Israel.
Dr Akoto invited Israeli investors to consider relocating to Ghana to grow the fruit which he said was not cultivated on a large scale in the country.
Following a high demand for avocado from the Asian market in the summer of last year, its global price peaked.
Dr Akoto described avocado as a high-earning crop on the world stage, stating that that was why the government was looking for investors to make it a cash crop for the country.
He noted that the presence of Israeli farmers in the country would be of great benefit because not only would they bring their expertise to bear on production, but there would also be the transfer of knowledge to local farmers interested in the cultivation of avocado.
He assured Israeli businesses interested in investing in avocado cultivation in Ghana of a sound business climate.
“We have the land, water and personnel,” he stated.
Readiness of Israel
In his response, the Chairman of the Israel Export Institute, Mr Adiv Baruch, said he was excited at the prospects of improvement in business relations between the two countries.
He said the Israeli government saw Ghana as a key business partner, and that was why the government had appointed a business attaché at the Embassy of the State of Israel in Ghana to further promote and deepen cooperation between the two countries.
Mr Baruch pointed out that Ghana could take advantage of research and technology from Israel to support its development; and pledged Israel’s readiness to do business with Ghana.
The Israeli Minister of Agriculture, Mr Uri Ariel, who was part of the meeting said Israel was excited to do business with Ghana.