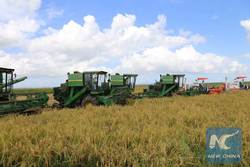 China pledges support for Mozambique's agriculture
China has pledged to provide US$10 million to support Mozambique’s agricultural sector, APA learnt here on Monday.
The announcement was made by China's ambassador to Mozambique, Su Jian on Monday during a visit by a Chinese parliamentary delegation to the Centre for Research and Transfer of Agricultural Technology Mozambique-China located in Boane.
The 60-member delegation, led by Li Zhanshu who is the chairman of the Standing Committee of China's 13th National People's Congress, arrived in Maputo on Saturday for an official visit.
Su said agriculture and food security are priority sectors for Chinese investment in Mozambique.
"China has chosen agriculture as the sector it should invest the most in the near future in Mozambique," he said.
The ambassador revealed Chinese companies have mostly invested in Mozambique’s agriculture and infrastructure sectors.
Su said the visit by the NPCC delegation was meant to strengthen ties between Maputo and Beijing.
First deputy Speaker of the Mozambican Parliament António Amélia praised the cooperation between Mozambique and China in parliamentary matters.
He revealed that more than 50 Mozambican officials have been trained by China in areas such as parliamentary management, information and communication technologies.