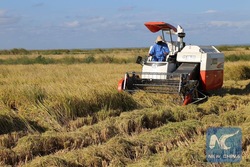 The Wanbao Mozambique rice farm, the largest of its kind undertaken by China in Africa, aims to develop 20,000 ha of farmland and contract with farmers in surrounding areas to grow crops over another 80,000 ha.
Xinhua | 14 May 2018

Chinese rice farm brings modern agriculture to Mozambican farmers
by Zhu Shaobin and Nie Zuguo
MAPUTO, May 14 (Xinhua) -- Through the fertile basin in south Mozambique's Gaza province, the expansive Limpopo River waters are flowing into the Indian Ocean at the province's Xai-Xai district.
People living here, if they can speak hello in Chinese, "ni hao", they most certainly also know another Chinese term Wanbao, name of a Chinese rice farm project.
This is because of the local farmers' ever growing enthusiasm to get involved in this key agricultural project under a "company plus farmer" cooperation model that is already leading some farmers toward prosperity.
Under the model, the project provides initial investment for infrastructure and other inputs including production materials, modern machinery, technology and maintenance to the farm, while farmers sign plantation and sales agreements with the company.
Through this model, farmers themselves are trying to maximize their profits by hard work and skills training provided by the Chinese.

Matilde Filomone Mariquele, a mother of five children, was born and raised in the same area where the project is developing agricultural activities.

"I benefited from the rice technology transfer program, and learned to produce rice using Chinese technologies on one hectare of land," she said.

She said that at the end of the harvest, she sold her produce to the company. After the company deducted the initial costs of production, the remainder profits were for her to keep. "With the money, I have improved a lot my life. I have built my house and my children are going to school," she said.

Meanwhile, 62-year-old Antonio Manuel is now even teaching other farmers how to grow rice as he is heavily involved in the project by cultivating crops over 40 hectares.

"I have an old tractor that I used, but with Wanbao I learned how to use modern tractors. My old tractor and non-mechanized methods produced only 1.5 tonnes of rice per hectare in the past. However, with modern tractors, the yields rise to as much as 8 tonnes, which is unbelievable!" Antonio said.

"Thanks to the project, both my children and grandchildren are living a stable life. Now I go to the fields to support the other farmers with teaching. In the future, I hope Wanbao will extend the growing areas to other corners of the country to help fight poverty," Antonio said.

Chinese ambassador in Mozambique Su Jian told Xinhua that Mozambique has a rice shortfall of between 400,000 and 600,000 tonnes. If the project achieves its set targets, it could potentially help Mozambique tackle the shortfall.

The Wanbao Mozambique rice farm, invested by the China-Africa Development Fund, is the largest of its kind undertaken by China in Africa. The project, a comprehensive business that incorporates plantation, storage, processing and sales, aims to develop 20,000 hectares of farmland, and will lead farmers in surrounding areas to grow crops over another 80,000 hectares.
"Agriculture requires long-term investment which means you get returns for your investment after long periods. However, the rice farm project undertaken by China demonstrates Chinese companies' efforts in giving back to Africa. The project is also in response to the actual development needs of Mozambique," Su said.
Currently, the project is being managed by the China Railway 20 Bureau Group Corporation. Guo Wei, General Manager of the company's Mozambique subsidiary, said that during the last planting season, the total plantation area reached 2,200 hectares.
According to the company, grain production has greatly improved as output per hectare can reach 6 to 7.5 tonnes compared to only 2 to 2.5 tonnes in the past. In 2018 alone, 450 local households have so far signed agreements with the company for cultivation on another 800 hectares.
"From a loss-making farming business in the past, farmers now are very interested in our project and seeking to establish cooperation with us with a view for better future income." Guo said.