Could a U.S.–China trade war lead to a new wave of land grabs? 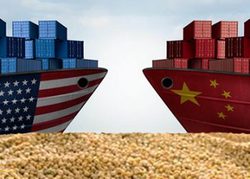 Finally, the threats posed by today’s trade tensions offer an opportunity to rethink current production and consumption patterns and reform food systems. For the sake of the environment and for global food security, meat and dairy consumption must be reduced in countries where the consumption is too high: essentially all industrialized countries. In addition, sustainable agricultural production methods such as reducing the use of chemical fertilizers and promoting the use of animal manure as natural fertilizer must be adopted. By taking such proactive steps, the world can build sustainable, more resilient food systems that can weather both the trade and climate upheavals.
Carin Smaller is Advisor on Agriculture and Investment at the International Institute for Sustainable Development (IISD).