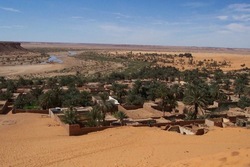 Algeria to open farming concessions to foreigners
By Hamid Ould Ahmed
Algiers | Reuters — Algeria plans to offer foreign investors concessions for farm land for the first time, according to an official document, as the oil producer seeks to boost food output and reduce reliance on imports.
Under the plan, which is expected to be discussed by the cabinet this week before being submitted to parliament, any foreign investor would need to work in partnership with the state or a private Algerian firm, the document seen by Reuters said.
Algeria, a member of Organization of the Petroleum Exporting Countries (OPEC), has been encouraging farmers with incentives such as low-interest loans in a bid cut the state’s $50 billion annual bill for food and other imports (all figures US$).
The government relies on oil exports for about 60 per cent of its revenues, which are only now starting to recover after a crash in crude prices from above $100 a barrel in 2014 to below $30 in 2016.
“Agricultural concessions will also be open to foreigners,” the government said in the document on the initiative.
The document did not give details about what areas of farmland would be offered or say how concessions would be granted. An official said details would be outlined in separate legislation.
Foreign investors have long complained about bureaucratic red tape and other hurdles to investment in Algeria, a nation of 41 million people.
In 2010, Algeria approved a law allowing private firms to lease state-owned farmland for 40 years. The private firms were allowed to enter partnerships with foreigners, but the foreign investors were not allowed to directly hold a concession.
That initiative failed to provide a major agricultural boost. Prime Minister Ahmed Ouyahia said this year that three million hectares from that scheme were still undeveloped and he promised more steps to improve the situation.
Algeria, one of the world’s largest grain importers, bought 8.4 million tonnes of cereals in 2017 at a cost of $1.7 billion.
Its imports of cereals and other crops in 2016 from Canada alone were valued at about $321 million, making up about 82 per cent of Canada’s total exports to Algeria that year, according to World Bank data.
Algeria’s government aims to boost wheat output to 5.3 million tonnes by 2022 from 3.5 million tonnes in 2017. It also wants to double production of potatoes, milk, meat and other products in the next four years.
As part of its effort to boost agriculture, the government plans to expand areas under irrigation to two million hectares in 2019 from 1.3 million hectares now with new dams, helping offset the reliance of farms on unpredictable rainfall.