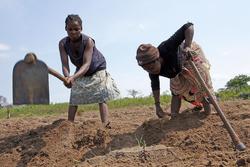 
Angola is a country rich in natural resources, such as diamonds and oil. When the oil price dropped, the government decreed a diversification of the economy, encouraging investment in agriculture from foreign as well as local companies. A new land law was passed to protect small-scale farmers and rural communities. But often the legal procedure is not respected and farmers lose the land on which their livelihood depends.
The video shows how LWF is working with rural communities, village chiefs, local and national administration to raise awareness and to support people in claiming their legal rights.
An LWF production. Funded by Bread for the World/ Brot für die Welt, Germany.