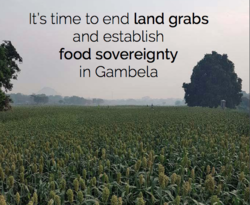 Organisations call on the new Prime Minister to stop the deal and scrap the decade-old failed land investment policy.

Karuturi's disastrous 300,000 hectares (ha) farm project in Ethiopia's western Gambela region is the most vivid example of the Ethiopian government's failed land investment policies. People were displaced, forests cut down and, after a decade of operations, the farm was barely functioning. In 2017, the land agreement was cancelled and Karuturi indicated that it was exiting the country. Sources, however, now indicate that the Ethiopian government is providing the company with a new lease for 25,000 ha in the same area, after pressure from the Indian government.

A new report by ASO provides an assessment of the Karuturi project and the other land deals that the Ethiopian government has promoted in Gambela over the past decade through its land policies. The report reveals that these projects, deals and policies have failed dramatically to bring development to the region, as was promised. The report calls for the new Ethiopian administration to scrap the policies, including its controversial villagisation programme, and to support traditional food and farming systems instead.

The report shows how, over the past decade, the Ethiopian government's land investment policy and villagisation programme have caused forceful eviction, displacement, and conflicts amongst indigenous peoples in Gambela and other remote parts of the country. The twin policies not only undermine the food sovereignty of local people but also fuel conflicts over resources in hotspot conflict regions.

“Successive Ethiopian regimes have made us victims of horrific injustices and human rights abuses, forceful evictions, discrimination and destruction of our cultures and environments,” says Ochalla Ojulu, Chairman of the Ethiopian Anuak Development Foundation.

Ethiopia should adopt fully the FAO-guidelines on the responsible governance of tenure of land, fisheries and forests, providing guidance to improve their governance of tenure in order to achieve food security for all. The recognition and respect of all legitimate tenure right holders and their rights, including indigenous peoples’ rights, as well as their consultation and participation in all relevant decision making including investment, is one of its basic principles of implementation.

“We wish for speedy return of peace to our ancestral land and an end to violent conflicts against our community.” Said Oron Ojulu, Chairman of the Anywaa Community Association in North America. “Development partners play key role in ending culture of impunity.”

The ASO report is based on investigations carried out by ASO, with support from the international non-governmental organisation GRAIN.