2017 was deadliest year on record for Colombian human rights defenders 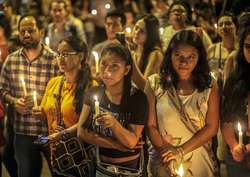 2017 was deadliest year on record for Colombian human rights defenders
More than 120 social leaders were murdered, many of them by contract killers, rights groups tell international criminal court
by Karen McVeigh

Killings of human rights defenders in Colombia, many of them by hit men or “sicarios”, have soared since the accord was signed, according to evidence submitted by rights groups to the international criminal court.
Last year, the first full year of peace in Colombia after half a century of conflict, was the deadliest on record for human rights defenders, with , compared with .
Human rights groups, which documented 609 killings of right defenders from 1 November 2002 to September 2017 in the country, say the Colombian government is failing to investigate the crimes properly. They are urging the ICC to open a formal investigation.
Luis Guillermo Pérez Casas is a lawyer with the Colectivo de Abogados José Alvear Restrepo (CCAJAR), based in Bogotá, which submitted the dossier jointly with the . He said the systematic nature of the killings, the scale, and the failure of the Colombian government to investigate them has reached the threshold of crimes against humanity.
“The murders of our colleagues must stop,” said Guillermo, speaking in London, where he was meeting with parliamentarians and others. “We hope the Office of the Prosecutor of the ICC will warn the Colombian government that if the impunity persists, they will be forced to open an investigation into those responsible, at the highest level.”
The peace deal, between the government and the Revolutionary Armed Forces of  (Farc),  that killed 200,000 people.
Yet, amid a general decrease in violence, more than 120 land and environmental activists, community leaders and others have been killed in just one year, the vast majority of them in crimes that are not being adequately investigated by the justice system, rights groups said.
The CCAJAR’s evidence to the ICC said that the 2016 peace accords “even appear to have contributed to the increase in violence against human rights defenders”.
One cause of the increased violence is that right-wing armed groups, or paramilitaries, move into territories left by the Farc. Human rights defenders who challenge their presence then become targets.
Those defending land rights are at particular risk, it said.
Guillermo said: “The peace process is failing because there’s a lack of implementation of the agreement. The process that was agreed upon has not been delivered.”
Most vulnerable, he said, are human rights defenders who work in the remote parts of the country.
“We are trying to salvage the peace accord. We want decisive action by the ICC that could improve and protect human rights defenders and would also benefit the demobilised FARC members.
“There are a lot of enemies of the peace process in Colombia and there are very powerful enemies of human rights defenders.”
The evidence to the ICC noted that: “The preliminary examinations of Colombia that the [Office of the Prosecutor] of the ICC has been conducting has saved many lives”
It said that the OTP had the chance to save more lives if it looked into the alleged systematic attacks against human rights defenders by paramilitaries and state actors.
Colombia is currently under a preliminary investigation by the OTP of the ICC, which began in 2004, to assess whether to formally investigate alleged crimes against humanity and war crimes by government, rebel and paramilitary forces.
Sebastian Eskauriatza, an expert in law at the University of Birmingham, said that for the ICC to open a formal investigation, the evidence would need to prove that a “widespread and systematic” attack had been directed against the civilian population, in furtherance of a state or state-like group.
Eskauriatza said: “Regardless of whether the ICC could bring a prosecution, it would need to decide whether it is in the interest of the peace process.
“The ICC is a complement to what is happening at the state level. If you are trying to negotiate a peace process, after 50 years of violence, you might not want a big organisation wading in.”
Three in every five of human rights defender murders were carried out by contract killers, according to a UN report.
Andreas Schüller of rights organisation ECCHR said the rise in violence against human rights defenders had been foreseen during the three to four years before the peace accord was signed: “If there was a power vacuum, there would be risks for human rights defenders. There are a number of security measures for human rights defenders that have not been implemented.”
In February, following the killing of 10 human rights activists in January 2018, Amnesty International called on the Colombian government to provide immediate protection to at-risk activists.
Last month, Colombia’s inspector general condemned the state’s protection of social activists as a total failure and called on it to take action against the illegal armed groups responsible for assassinations.
And last year Human Rights Watch called on the Colombian government to investigate the killing of activists in the country. It concluded that while the attorney general’s office made significant progress in 2016, achieving four convictions on cases involving activists killed that year, no one had been charged for most of such killings in 2016 or in 2015.