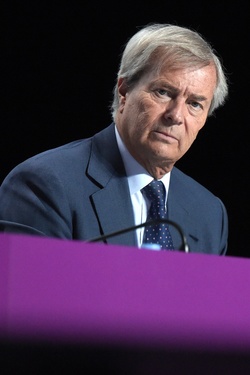 Billionaire French industrialist Vincent Bollore, who is a major shareholder in the plantation company SOCFIN, is being questioned in Paris over allegations that his conglomerate used corrupt connections in Africa to win port contracts.
AFP | 26 April 2018

French tycoon Bollore's African assets
French transport and media giant Bollore's President Vincent Bollore attends a Vivendi group's general meeting in Paris. (File, AFP)
See also: Africa corruption probe: French tycoon brought before magistrates
Billionaire French industrialist Vincent Bollore is being questioned in Paris over allegations that his conglomerate used corrupt connections in Africa to win port contracts.
Founded in 1822, the Bollore Group, which is majority owned by the Bollore family, has diverse interests ranging from logistics and energy to plantations and financial investments.
In 2017, it had a turnover of $13.11bn and more than 80 000 employees worldwide, according to the group.
Africa is one of its main areas of growth.
The group is present in 46 African countries, which accounted for more $3bn in revenue last year. This year it is planning to invest of $365m on the continent.
Ports
Bollore Africa Logistics is a major player in West Africa, especially in former French colonies.
It operates container terminals in 10 ports in the region, from the Guinean capital of Conakry to Pointe-Noire in the Republic of Congo. It also has public-private partnerships for managing 16 container terminals elsewhere on the continent.
The group is a leading presence in Ivory Coast, where it has been operating Abidjan port since 2004. It has plans to build a second terminal able to handle the biggest container ships involved in West African trade.
The probe into 66-year-old Bollore is over the port contracts in Conakry and in Lome, the capital of Togo.
Prosecutors are looking into whether Bollore Group's communications arm, Havas, undercharged Guinean President Alpha Conde and Togolese President Faure Gnassingbe for work on their election campaigns as a sweetener for the contracts, according to the French daily Le Monde.
Railways
The Bollore Group has a majority share in three railway concessions in Africa: Sitarail (Ivory Coast and Burkina Faso), Camrail in Cameroon and Benin's Benirail.
Investigators blamed Camrail for safety failings after a disaster in Eseka, central Cameroon, in 2016 in which 79 people were killed and 600 injured.
Bollore Africa Logistics is meanwhile encountering problems in an ambitious 3 000km scheme to build a rail web linking the Benin capital Cotonou, Abidjan, the Niger capital of Niamey and Ouagadougou, capital of Burkina Faso.
In 2008, Benin and Niger awarded a contract to build and manage the 740km section between Cotonou and Niamey to Petrolin, a company run by businessman Samuel Dossou.
The contract was withdrawn in 2013 and awarded to Bollore's Benirail, sparking a legal battle that Petrolin won in 2017.
The presidents of the two countries, exasperated by years of delay, said on April 7 that they may now turn to China, which has earmarked around $60bn to develop infrastructure in Africa.
The Abidjan-Ouagadougou link of 1 260km used to be the main export route for enclaved countries such as Niger, Mali and Burkina Faso, as well as the cheapest transport available for Ivorian businesses.
A $487m scheme to restore the decrepit track began in December 2017, after a two-year delay.
Agriculture
Bollore has a 38.8% stake in a Luxembourg holding company, Socfin, which manages nearly 200 000 hectares of palm-oil and rubber plantations in Africa and Asia.
Socfin has come under fire in particular over its palm-oil production. In 2015, campaigners launched a protest against Bollore, saying Socfin had "grabbed" land and displaced local communities.
Socfin filed a libel suit against media and NGOs, which it lost in a Paris court last month.
Bollore is also suing a French journalist, Tristan Waleckx, and the head of France Televisions TV network over a documentary showing workers complaining about conditions at Socapalm, Socfin's subsidiary in Cameroon.