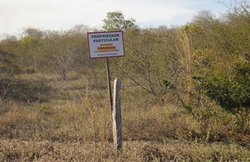 Harvard endowment linked to land grab in Brazil
Ever since the global financial crisis of 2008, large investment firms have looked to purchase overseas farmland as a stable source of revenue. With its vast reserves of pristine land, Brazil is one of the top five countries most targeted by foreign investors. The Harvard Management Company, which handles Harvard University's $37 billion endowment, has recently been linked to an agribusiness that may have been involved in deforestation and fraudulent land titles.

Journalists Alicia Prager and Flávia Milhorance have reported on a complex ownership structure, through various shell companies, that puts the Harvard Management Company in possession of "Caracol Agropequaria," a tract of land in Brazil's Cerrado region, which is the size of Los Angeles.
240 families allege that, over twenty years ago, this state land was obtained illegally through fake documents. They also insist that they were driven off their farms by armed men.
Alicia and Flávia wrote about the situation as part of a six-part series on Brazil's Cerrado region for the global environmental news service Mongabay. They join the program to talk about the consequences of global capital buying up foreign land.