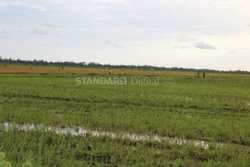 Part of rice farm destroyed by birds at the Magombe Multipurpose Rice Scheme in Bunyala Sub County. The birds are said to have migrated from Dominion Farms in the neighbouring Siaya County after the proprietor shifted from rice to sugarcane farming.
Standard | 25 April 2018

Rice farmers in Bunyala, Busia County, are counting losses following destruction of hundreds of acres of plantation by birds.

The destruction at Magombe Multipurpose Rice Scheme is a setback to the economy of Budalang’i Constituency, where rice is a major cash crop.

Magombe Multipurpose Cooperative Society Chairman Christopher Gunyi said farmers now have to incur extra costs of spraying the crops to either kill the quelea quelea (weaver) birds or keep them at bay.

“The rice was due for harvesting, but they have been destroyed and this is likely to affect the yield this year. At least 400 bags would have been harvested from the acres that have been attacked,” said Mr Gunyi.

He said the birds migrated from Dominion Farms in the neighbouring Siaya County after the flatter’s proprietor shifted from rice to sugarcane farming.

Gunyi said the Dominion Farms owner used to spray the plantation every season.

Charles Odunga and Peter Onyango are the worst hit after birds invaded their seven acres of rice farms.

On Sunday, Busia Deputy Governor Moses Mulomi presided over the spraying of the crops. But the framers said it was too late to salvage any produce.

“The spraying has been done very late after my six acres of rice was damaged. I am going to harvest nothing this year,” Mr Odunga said. He urged the county government to put in place measures to permanently address the problem.

Gunyi said the spraying had reduced the number of birds, but not eliminated all of them. He wants the spraying to be continuous since at least 500 acres of rice crops are at their flowering stage now.

Mr Mulomi said experts will carry out research to see how the quelea birds can be eliminated.