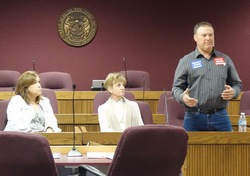 Tasha Stephens, left, of Jackson County, and Vickie Gassman, of Howard County, listen to Jeff Jones, of Callaway County, during Tuesday's Family Farms, Not Factory Farms panel at the Capitol. Jones said CAFO operations near Columbia have not benefited the local community and have resulted in foul odors and a dangerous manure spill. (Photo by Allen Fennewald /News Tribune)
News Tribune | 18 April 2018

Farm group opposes CAFOs, foreign-owned farmland
by Allen Fennewald
The effort to promote legislation intended to protect family farmers and rural families against big business interests continued Tuesday at the Missouri state Capitol with "Family Farms, Not Factory Farms Lobby Day."
Supporters of family farming who oppose the rise of big-business agricultural practices in Missouri gathered to lobby legislators against concentrated animal feeding operations and foreign ownership of Missouri farmland and for increased local control of fertilizer application.
The statewide family farming organization Missouri Rural Crisis Center led a panel presentation to about 50 people, many of whom adorned red shirts that read, "STOP FACTORY FARMS."
"What we try to do is make people realize they are not alone," MRCC Communications Director Tim Gibbons said. "They are fighting (CAFOs) all over the state. The reason why we (only) have 500 CAFOs (in Missouri) is local control. We still have the ability of our local representatives to pass health ordinances, and you know what corporate agribusiness hates? People being able to stand up for themselves. They hate it, and that's why for 15 years they've tried to take away local control."
Gibbons urged attendees to politely speak with legislators and oppose the passage of House Bill 1614 and Senate Bill 627, while voicing support for House Bills 2206 and 2161.
HB 1614 would prohibit political subdivisions from adopting or enforcing ordinances or regulations, such as county health ordinances, relating to seeds or fertilizers. It has passed the House into the Senate. Gibbons said the bill would radically damage the ability of locally elected representatives to protect the health and welfare of constituents from large-scale corporate livestock operations.
SB 627, which has passed into the House, would modify the definition of livestock to include honey bees. Among its other provisions is the prohibition of political subdivisions from adopting or enforcing ordinances, rules or regulations relating to the labeling, cultivation or use of seeds or fertilizers. The act won't apply to any ordinance enacted before Aug. 28 and excludes rice seed. Gibbons said the bill would remove the ability of county commissioners to protect local farms and rural residents from installation of corporate CAFO operations.
HBs 2206 and 2161 would exclude foreign corporations from obtaining Missouri farmland and allow the Missouri Department of Agriculture to track foreign purchases of Missouri farmland. Gibbons said the 2013 legislative session passed a bill that allowed as much as 289,000 acres of Missouri farmland to be owned by foreign entities. It has allowed Chinese meat packer WH Group to obtain more than 40,000 acres in the state.
Related Article
Local farming groups hope trade deal can stop dueling tariffs
Read more
Four family-farming panelists spoke of fights against CAFOs in their respective counties.
Jeff Jones, of Callaway County, said CAFO operations near Columbia have not benefited the local community and have resulted in foul odors and a dangerous manure spill.
Vickie Gassman, of Howard County, spoke of how her county implemented a health ordinance to prevent major swine production management company Pipestone System from installing a CAFO about 1.5 miles from her home.
Tasha Stephens, of Jackson County, spoke of the proposed Loan Jack cattle CAFO in nearby Johnson County. She said it is important that the No. 1 industry in Missouri, agriculture, doesn't negatively impact another major economic driver, tourism.
"No one wants to visit a state with dirty water," she said.
Susan Williams, of Cooper County, spoke against the proposed Tipton East swine CAFO, also managed by Pipestone System. DNR will hold a public hearing on the Tipton East CAFO permit at 6 p.m. today at the Tipton Country Club before deciding whether to approve the application. Williams urged everyone to attend and oppose the CAFO, which she said could contaminate nearby streams and groundwater from which many rural residents draw water, among other concerns.
Before attendants began to lobby other representatives, state Rep. Tracy McCreery, D-Olivette, stopped near the end of the panel presentation to offer her support.
"Local control is a huge thing," McCreery said. "This Legislature's hypocrisy of some of the people I work with is just painful. We go crazy as the Missouri Legislature when the federal government tries to tell us what to do, but we turn around and try to tell the elected officials kind of beneath us, if you will, what they should and shouldn't do. It's just crazy, and I don't know why they can't see how ridiculous that is. I trust local control, and I think officials at the local level are the most in touch with their communities."
Original source: News Tribune
TWITTER
FACEBOOK
WHATSAPP
PRINT
E-MAIL
TWITTER
FACEBOOK
WHATSAPP
E-MAIL