How much land is in foreign hands? 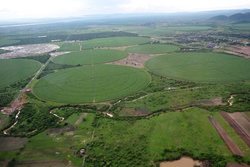 The Zambia Land Alliance has challenged government to make public how much land is currently in the hands of foreigners.
Times of Zambia | 15 April 2018

How much land is in foreign hands?
By SARAH MWANZA

The Zambia Land Alliance has challenged government to make public how much land is currently in the hands of foreigners.
Land Alliance executive director Nsama Chikolwa said there was need for government to carry out a land audit first before doing the land titling process it was currently undertaking.
Ms Chikolwa said knowing how much land was in the hands of foreigners could help Zambians make the right decisions about land.
She said Zambians had the right to know how much land was under customary tenure and how much under the state.

“Personally, I don’t believe that we still have six per cent of land under the state and 94 per cent as customary land. It’s a myth,” she said.

Ms Chikolwa said land was the birth right of every Zambian but it was clear that the laws in place no longer effectively protecting this important heritage.

She said Zambian living under customary tenure were particularly vulnerable to land grabs.

“At times we have heard instances where someone just goes with a title on a particular land and displaces people who have been occupying it for so many years,” she said.

Ms Chikolwa also said the different roles of government institutions were not well-harmonised as which institution or individual was dealing with functions of land administration.

She said currently the ministries of Agriculture, Local Government, Tourism and the Office of the Vice-President all administered
land at one level or other.

With so many actors involved in land administration without properly defined roles, it was confusing for Zambians to understand their rights and obligations.