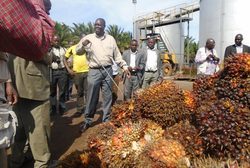 Govt secures Shs720b for oil palm expansion
By HENRY LUBULWA & IVAN KIMBOWA
Government has secured $200m (about Shs729b) to roll out the oil palm project to other parts of the country.

The Minister of Agriculture, Mr Vincent Ssempijja, made the revelation while on a routine visit to the Kalangala palm oil gardens at the weekend.

Mr Ssempijja said the government had tasked oil palm scientists to take soil samples for testing following a successful tour of the project on Bugala Island.

Soil samples were taken from the districts of Buvuma, Buikwe, Mukono, Mayuge, Namayingo, Masaka and those in Bunyoro Sub-region where the project would be extended.

“Researchers at the National Agricultural Research Organisation (NARO) have already provided reports which are positive and the project is sustainable in those districts. The testing involved the planting of palm oil fruits in the areas and indeed the project can succeed there,” he said. Since 2006, oil palm has been grown on a large scale on Bugala, Bubembe and Bunyama Islands in Kalangala District.

However, leaders have been advocating for the extension of the enterprise to Bukasa and Bufumira Islands as well as Buvuma Islands in Buvuma District.
Warnings

The minister’s pronouncement comes two weeks after the legislators on the Parliamentary Committee on Agriculture advised government to swiftly implement the oil palm project on Buvuma Islands, warning that any further delays would give unscrupulous individuals a chance to grab land earmarked for the project.

The $200m project according to Minister Ssempijja will cater for the citizenry land compensations, tilting of the land in the identified districts and planting of the palms. “The $ 75m (Shs273B) is loan from the International Fund for Agricultural Development while the private sector would fund almost $100 m (Shs364b). The rest of the funds will be generated by the central government” Mr Ssempijja said.

Since 2006, a section of conservationists have been opposed to the Kalangala Oil Palm project as was the case with the Buvuma project saying it is a big threat to the environment.
Environmentalists blame the disappearing forest cover on the increasing change in land use where large acreage of forest land have been converted into farmland.
Minister defends

In defence, the minister, however, said the project implementers have done due diligence to ensure that all national forest reserves and the buffer zones are protected to prevent environmental degradation.

The main Island Bugala where the oil project was launched still has 14 national forest reserves with an approximate 6,400 hectares. So far, 10,000 hectares of palm oil have been planted on the island with 3,500 of those belonging to private palm oil farmers.