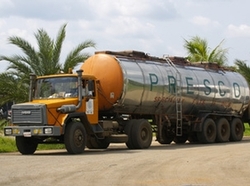 As part of its ongoing expansion drive, Presco Plc says its recent investment in green energy will boost its corporate earnings and increase returns to shareholders.
The firm has also set aside 15,000 hectares for cultivation in Edo State.
The Managing Director, Mr. Felix Nwabuko, in a statement on Tuesday, explained that with the cultivation of over 8,000 hectares in two years, it would take just another year to get the full plantation ready.
He said the company had cultivated 3,600 hectares in Orhionmwon Local Government in Edo State, adding, “This year we intend to plant on 4,000 hectares. If we can do 100, 000 hectares in Edo State, we will do it.”
Nwabuko explained that the company’s 15,000 hectares expansion project was as a result of the far-reaching reforms being implemented by the Edo State Government in the agriculture sector.
The Presco boss said, “The deliberate effort and reforms initiated by the Godwin Obaseki-led administration and the Federal Government, to prioritise agriculture as an alternative means to achieve economic growth are highly commendable.”
He lauded Obaseki’s initiative to make land available for investors who are ready to invest in the people and other resources in Edo State.
He added, “I am excited that the state government is mapping out land through the Geographic Information Service initiative, for allocation of land for investors who mean business in the state. We expect that state government would speed up the process.”
Nwabuko said the reforms contributed to the company’s plan to expand its operations, noting that, “Presco is investing on green energy production through our biological assets – our plantation. Last year, we planted on 3,600 hectares, in our new location in Orhionmwon Local Government Area. This year we intend to plant on 4,000 hectares. If can do 100, 000 hectares in Edo State, we will do it.”
“In 2016, we decided to expand on three areas, all of which complement the policies of the state and Federal Government on agriculture. The areas include import substitution as every additional tonne of what we produce as we expand, will limit what the country imports,” he added.
He said creating alternative means of driving sustainable economic growth other than relying on crude sale was a bold step, adding that, “The initiative to focus on agriculture reforms to drive economic growth is noble as it becomes important that government realises that agriculture is key to sustainable growth.”