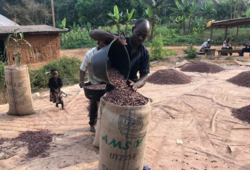 Legal activism key to securing land rights during new investment phase
by Lorenzo Cotula
In the face of rapid changes, how can people in Cameroon ensure they get the best deal to protect their land?
In the shade of a local school’s corrugated iron roof, a group of men and women debate what to do.
Located not far from the town of Kribi, on Cameroon’s Atlantic coast, the village is already squeezed between two logging concessions. Now, a company proposing an agri-business plantation wants a significant amount of land. Some people see this as an opportunity, others are worried about where they will grow their crops. All have struggled to understand the full implications of the far-reaching changes their decision will bring.
This scenario is a recurring situation along Cameroon’s Atlantic coast. Urban expansion, logging concessions, mining exploration permits, rubber plantations, protected areas, a palm-oil boom and new infrastructure including a deep-sea port, roads and temporary housing for the construction workers have together compounded pressures on land.
In the regional land registry, many applications for land titles are still pending, submitted by people determined to protect their land rights as the pressures intensify – even if that means ceding part of their land to speculators who could help them pay for the titling.
A global land rush
Around the world, a spike in commodity prices from the mid-2000s underpinned a global investment boom in agriculture, mining and petroleum.
As the village debate in Cameroon illustrates, big deals create both hope and fear. Supporters talk of jobs, revenues and access to markets but all too often, the deals violate the land rights of rural people – particularly those without the money, connections and information to protect their interests.
In response, legal activists around the world are helping people use the law to protect their rights and their land. This ranges from helping communities to register their land titles, to supporting negotiations with companies and providing redress through court litigation or complaint mechanisms.
In some cases, these initiatives have achieved significant results. In Tanzania, for example, grassroots land rights monitors helped farmers secure fairer compensation and stop contested projects, while in Sierra Leone community paralegals helped local landowners renegotiate land leases. Last year, Kenya’s Ogiek people secured a landmark win at the African Court of Human and Peoples’ Rights after decades of forced evictions from their ancestral lands.
A changing landscape
Over the past few years, the slump in commodity prices slowed the pace of companies’ search for land. But the fact that fewer new investments are being publicly recorded does not mean we should be complacent. In many places, past deals are now being implemented, and communities are feeling the squeeze. Helping them obtain redress when violations occur is still an important priority.
Yet the changed context also creates space for a different approach. Most analysts expect that, sooner or later, commodity prices will pick up fuelled by the world’s growing population and by rising consumption expectations among the wealthy. Besides ensuring that new and existing investments respect rights and deliver benefits, there is also work to do to support different groups of rural people in advancing their own development priorities and strategies. And to ensure that, when changing commodity prices drive more companies to seek land, they are better prepared.
Improving readiness and resilience at the local level can also tackle issues that recourse to an individual company cannot address. The growing pressures on land are often linked to a combination of multiple, often uncoordinated, investments in agriculture, mining, petroleum, forestry and infrastructure projects. In such geographic hotspots as Cameroon’s Atlantic coast, systemic problems require systemic solutions.
From analysis to action
Legal activists can play a key role in supporting this more proactive agenda from the bottom up. At the grassroots level, this may involve helping communities get organised and shape systemic land use decisions even before discussing individual investments – particularly in areas that are likely to attract strong private sector interest. Nationally, law reforms can help address the problems exposed by the recent surge in investments, from weak land rights protection to inadequate consultation requirements.
Reforming the law also provides opportunities to consolidate advances made through recent litigation. For example, the Ogiek judgment set an important legal precedent, which activists can use to push for better laws to protect indigenous peoples’ land rights across the continent.
Last December, Cameroon’s parliamentarians, government officials, traditional leaders and civil society debated law reform options at a two-day event in parliament. Discussions brought out the complexities, but also the imperative to act. Helping citizens – from the Atlantic coast right across the country – to shape the reform shows what can be done to support rural people in protecting their land rights.
Lorenzo Cotula is a principal researcher on law and sustainable development at the International Institute for Environment and Development (IIED)