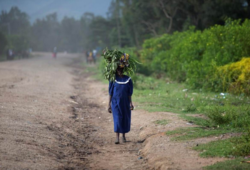 A woman walks in the village of Miwani in the district of Kisumu, Kenya, April 19, 2017. (Photo: REUTERS/Baz Ratner)
WRI | 20 March 2018
Women short-changed on commercial land deals in Africa - report
by Kevin Mwanza
NAIROBI, March 20 (Thomson Reuters Foundation) - Women are often short-changed compared to men when communities are compensated or resettled during commercial land deals in Africa, and governments should take action to rectify that, researchers said on Tuesday.
The World Resources Institute's (WRI) research showed men had received up to six times as much for their land. And although women usually had smaller land parcels, they also lost access to resources such as rivers, forests and social networks.
Among other measures, the U.S.-based WRI said governments should enact laws ensuring women receive an equitable share of compensation payments made to households.
"There is usually a power asymmetry between the community and the investor. These deals are presented to the community as almost-done deals with women getting the short-end," said WRI associate researcher Celine Salcedo-La Vina.
"Most of the time the expected benefits are not legally binding," she told the Thomson Reuters Foundation by Skype.
WRI focused on Tanzania and Mozambique, which are among the places where major commercial deals in agribusiness, tourism and mining have displaced thousands over the last decade, she said.
Land in Africa is often communally held, with fathers assumed to be the rightful owners who usually pass it on to their sons. That makes it hard for women to own land except through their husbands or by buying it, the World Bank has said.
Women are usually not compensated for lost farms because they are not deemed to own the fields they cultivate, and often grow subsistence crops. Men, on the other hand, typically plant cash crops whose value is easy to determine, WRI said.
Some African governments, including Tanzania and Mozambique, have enacted new laws to address how investors engage communities during land deals to reduce inequality, WRI said.
But these changes have done little to address how women are compensated or resettled during commercial deals, because most of the laws use "gender-neutral language".
"When applied in patriarchal contexts (these laws) result in women's marginalization," the report said.
Tanzania and Mozambique are working to change their land laws to bring in more rights for women during commercial land deals. However, those would first have to tackle the cultural norms of how women come to own land, Salcedo-La Vina said.
"We have seen where we have men and women working together during land deals, it usually strengthens community rights."
WRI also recommended that women's land uses and contributions as heads of households be taken into account, that land titles be in both spouses' names, and that intangible assets be included when determining compensation.