Peasants of the world, intensity our struggle for land and life!

Peasants of the World, Intensity our Struggle for Land and Life! 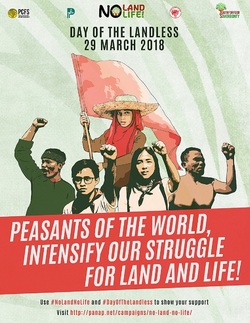 The militant tradition of commemorating the “Day of the Landless”led by the Asian Peasant Coalition (APC) together with its network continues this year on March 29, with the theme “Peasants of the World, Intensity our Struggle for Land and Life!” This year, the Day of the Landless will be jointly organized by the Asian Peasant Coalition (APC), People's Coalition on Food Sovereignty (PCFS), the 'No Land, No Life' campaign of the PAN Asia Pacific (PAN AP) and the Youth for Food Sovereignty (YFS).

A decade after the world food crisis in 2008, land grabbing continues to displace poor people, especially peasants, all over the world. It is a major threat to the livelihood mainly of rural populations (i.e. farmers, fishers, and indigenous peoples) and the food security of whole nations. Huge tracts of agricultural land have been and are being converted for agro-industrial use for the production of non-food agricultural commodities mostly for export. The monopoly control of landlords and big corporations over huge tracts of land has tightened more than ever through the neoliberal restructuring of agriculture. Genuine land reform remains elusive for the millions of farmers who toil under exploitative and hazardous conditions, while losing control over food production.

Landlessness and monopoly control over land and resources are worsening. Through land grabbing, foreign capital opens up additional opportunities to rake in profits and tighten its grip on Asian agriculture. China’ rise as a dominant player in the global market is one of the major developments that is feeding this trend. Its Belt and Road Initiative (BRI) to consolidate and expand its economic power, among other strategic objectives, targets massive amount of land and other resources for its vast network of transport infrastructure, industrial/agricultural zones, logistics hubs, etc. at the expense of rural communities.

For instance, Chinese interests in Pakistan is highlighted in the US$67-billion China-Pakistan Economic Corridor (CPEC), an agreement signed between China's and Pakistan's governments in 2015 and which is a flagship project of the `BRI. In Sri Lanka, on the other hand, a Chinese state-owned company has begun further development of the controversial Hambantota port including the construction of an airport, numerous highways, factories, oil refineries, and a 15,000-acre industrial zone. The project sparked violent protests due to fears that Beijing is attempting to effectively establish a Chinese (economic and military) colony in Sri Lanka. In Cambodia, large-scale land acquisitions through economic land concessions (ELCs) effectively monopolized land control in the hands of corporations, especially Chinese firms. Currently, more than two million hectares of land in the country are under ELCs, most of which have been transformed into plantations for sugarcane, rubber, banana, cassava, pepper, pulp, wood, and dragon fruit. Around 370,000 hectares under 42 ELCs have been granted to Chinese companies, such as the 40,000-hectare sugarcane plantation managed by Heng Fu Sugar Co. in the province of Preah Vihear.

While China’s rise as a global power is creating more conditions for land grabbing, the usual players such as international banks, foreign investors and local oligarchs and landlords behind the displacement of countless rural families also remain. In India, for example, the Japanese government, along with international financial institutions (IFIs) such as the Asian Development Bank (ADB) and the World Bank (WB), continue to be the main source of funding for the country’s “development” projects that threaten the lives and livelihoods of the rural populations of India. These include the development of national investment and manufacturing zones (NIMZ), the Public Private Partnership (PPP) for Regional Integrated Development Enterprises (PRIDE), SEZs, and the 2,700 sq. km. Coastal Corridors.

In Indonesia, the Jokowi administration currently has 225 mega-infrastructure projects bankrolled by the WB, ADB, the China-backed Asian Infrastructure Investment Bank (AIIB), as well as by investors from the United States, United Kingdom, Singapore, Germany, and China. These infrastructure projects involve the construction of dams, roads, airports, ports, and conservation and nature parks. Huge tracts of land also continue to be converted into plantations for palm oil, rubber, paper pulp, and into PISAgro projects (mainly by the WB and various multinational/transnational corporations) and food estates. The PISAgro aims to promote  public private partnership  to bring the so-called New Vision of Agriculture of the World Economic Forum (WEF) .  Mining, energy projects, and tourism development projects (where the Chinese interests lie) also figure prominently among the foreign investment projects in Indonesia which could potentially have negative impacts on the rural communities.

In the Philippines, the Duterte government has introduced the US$180-billion “Build, Build, Build” infrastructure development program, mainly funded by Chinese, Japanese and other foreign loans and includes the construction of ports, roads, railways, and irrigation facilities, among others. On top of this are projects already underway like the Php71-billion MRT-7 light rail project that will link Quezon City in the national capital region to the adjacent province of Bulacan that will clear more than 300 hectares of agricultural land and displace around a thousand farmers and their families. Another is the Clark Green City project in Tarlac and Pampanga provinces, which intends to develop hectares of productive agricultural land into, among others, central business and ecotourism districts that will displace some 20,000 indigenous peoples and farming families in five towns.

Land grabbing is often accompanied by militarization and vicious violations of human rights in the countryside. In the Philippines, for instance, where the southern island of Mindanao has been placed under Martial Law apart from a nationwide counterinsurgency program called “Oplan Kapayapaan”, the Armed Forces of the Philippines (AFP) is being used to protect installations and infrastructures of big businesses and landlords, and to clear areas to give way to so-called development projects, including plantations and mining operations.

In Indonesia, under the Jokowi administration, human rights violations against the farmers resisting land grabbing have escalated. At least 138 incidents have been reported wherein 648 people were arrested, 235 people were shot and 10 people died due to land grabbing.

From January 2017 to February 2018, the Land and Rights Watch, an initiative of the PAN Asia Pacific (PANAP), has monitored 155 victims of killings related to land struggles/conflicts or almost 12 killings per month and 13,484 victims of displacement.

Despite this, the peasant resistance in Asia is growing. In response to landlessness and land grabbing, APC members in the Philippines, Indonesia, Pakistan, Thailand, Bangladesh and India, have launched and continue to launch land occupation and cultivation campaigns in plantations, haciendas, public lands, disputed lands, and abandoned lands covering thousands of hectares.

March 29 is a historic event in the people’s struggle for land and resources in Asia. On the same date 14 years ago, the Asian Peasant Coalition (APC) was founded and has, since then, consistently taken the task of challenging imperialist and feudal oppression and exploitation.Last year, the APC in partnership with the “No Land, No Life” campaign of the PAN Asia Pacific (PAN AP), coordinated actions were organized by APC members and PANAP partners composed of 33 organizations in 8 countries such as in Bangladesh, Cambodia, India, Indonesia, Malaysia, Pakistan, Sri Lanka and the Philippines from March 25 until March 29 highlighting our struggle for genuine land reform and food sovereignty.

This year's Day of the Landless will be co-organized by the Asian Peasant Coalition (APC), the PAN Asia Pacific (PANAP), People's Coalition on Food Sovereignty (PCFS), and the Youth for Food Sovereignty (YFS). On this day, APC members and networks will organized coordinated actions such as rally, exhibit, seminar, dialogue, public meeting, discussion group, and land occupation, among others, to commemorate Day of the Landless.

Just following this year’s Day of the Landless, on March 30, the YFS will be holding its first general assembly. The YFS is a new network of youth organizations promoting the role of the young people in agriculture which was launched in 2016 in the Philippines.

Amidst the widespread landlessness, militarization, and deprivation, the youth in various rural communities particularly face at an early age the reality and a dim future of worse hunger, unemployment, and displacement. Thus, the Day of the Landless 2018 will also highlight the plight and struggles of the rural youth. This could be of historic importance in the efforts to enlist the vigor of the youth in the peasant’s intensifying struggle for land and life.