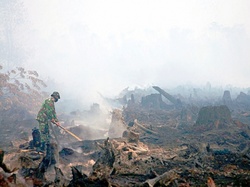 Over a dozen wooden signs stand along the Nagari Maligi plantations main road in the Pasaman subdistrict, Pasaman Barat (west Pasaman) regency, West Sumatra. There are only oil palm trees and their reddening fruits as far as one can see while going down the muddy, winding road. The wooden signs lining the right side of the road say the land is owned by Permata Hijau Pasamans Unit II as well as by other companies. Permata Hijau's signs threaten those who steal from the plantation with five years imprisonment and a fine of up to Rp1 billion.

On the left side is a plasma (smallholder) plantation jointly run by the local community and Permata Hijau, covering over 1,000 hectares. Because of this land, around 100 Nagari Maligi residents (‘nagari’ means village in the local language) have been protesting for days at the Wilmar Group’s representative office-also home to Permata-in West Pasaman since March 9. "In 2007, the plantation was still Maligi residents’ plasma. But the company turned the land over to another group of farmers," said Hendro Bara, 59, a customary figure of Nagari Maligi.

The protest drew the central government’s attention. The coordinating ministry for political, legal, and security affairs summoned several West Sumatra government officials, who then held a meeting at the West Pasaman regent’s office last Wednesday. At first, the community refused to attend because they assumed the meeting would only benefit Permata Hijau. "Because the invitation mentioned (or implied) ‘social conflict’ while our issue is purely a legal dispute," said Zulhendri Hasan, the Nagari Maligi community’s legal representative. The meeting ended with several recommendations, including for Permata Hijau to compensate losses should the community’s documents prove to be valid.

Permata Hijau Pasaman belongs to the Wilmar Group. The business group-founded by Malaysian-born businessman Kuok Khoon Hong, alias William Kuok, with a head office in Singapore-is estimated to control 656,000 hectares of oil palm plantations in Indonesia. Despite only owning a moderate amount of land, the company controls around 30 percent of Indonesia’s oil palm industry through ownership of refineries, processing plants and transportation. The group’s significant slice of the cake places Wilmar among companies dominating Indonesia’s oil palm business.

Smallholder plantations, known as ‘plasma’ plantations in Indonesia, are managed by companies along with local communities. Wilmar should have let the Maligi community run the village’s 2,100 hectares of oil palm plantation. The agreement was spelled out in a contract for the customary land’s handover signed in 1997 by Permata Hijau’s representative and the ninik mamak-clan figures in Minang communities-in Maligi. The documents we obtained mention that the contract requires Wilmar to assist Maligi residents in developing smallholder plantations. Wilmar was required to turn over the land’s management to the community in 2010.

Permata Hijau claims it only manages 665 hectares of oil palm plantation, but Tempo found that nearly 2,100 hectares of Maligi’s ancestral land-turned-smallholder plantation were planted with oil palm. Permata Hijau Pasaman’s signs can be seen along the road, but the numbered signs that mark the company’s concession land are not in the right order, with sign No. 22 moved next to No. 19.

The company is suspected of trying to make it seem as though their landplot is smaller, to evade accusations of land misappropriation. A land certificate with private ownership has even been issued for the smallholder plantation land with a customary land status. Based on a copy of the certificate we managed to obtain, the landplot’s area is around 600 hectares.

The ninik mamak and the community reported the dispute to the police seven months ago. The Nagari Maligi community feels that Wilmar has defrauded them, inflicting losses of Rp500 billion. But the police have not done much to resolve the case. "This (case) has been ongoing for a very long time," said Erdi Adrimurlan Chaniago, West Sumatra Police director of general crimes.