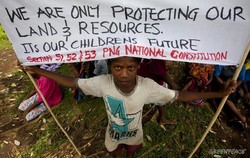 Report finds that the PNG government distributed over 5 million ha of customary land  to private companies for large-scale agricultural development, without the free, prior and informed consent of all affected landowners.
ActNow | 13 March 2018

PNG land grabbers could potentially face International Criminal Court
The International Justice and Human Rights (IJHR) Clinic at the Peter A. Allard School of Law, University of British Columbia has released a manual that explores the novel idea of prosecuting land grabbing as a crime against humanity.
IJHR found that between 2002 and 2011, the PNG government distributed at least 5.2 million hectares of customary land — around 12 percent of PNG’s total landmass — through the SABLs to a number of private companies for large-scale agricultural development, without the free, prior and informed consent of all affected landowners.
It found that nearly one-third of PNG’s 46 million hectares is now in the hands of foreign corporations, predominantly for logging. Since most of the SABLs last for 99 years, they effectively extinguish customary land rights.
IJHR noted that as communities have lost their principle source of livelihood and security, protests and attempts to defend land rights have often been met with force and violent crackdowns by police forces commonly designated to serve the interests of the logging industry.
“Vulnerable communities in low governance regions have typically had little recourse or remedy when their land has been seized, often for corporate development of agricultural resources,” said Nicole Barrett, Director of Allard IJHR Clinic.
“While some land seizures are legitimate expropriations, many are not, resulting in significant human rights violations — with disproportionate effects on indigenous groups, women, children and ethnic minorities.”
In 2016, the Office of the Prosecutor of the ICC stated that it would consider giving special consideration to Rome Statute crimes committed by or resulting in the illegal dispossession of land, exploitation of natural resources, and environmental destruction.
Driven by this new policy direction, “Breaking New Ground” lays out the steps to prosecute illegal land grabbing as a crime against humanity, briefly examining land seizures in Papua New Guinea, Brazil, Myanmar, and Cambodia, as well as the laws surrounding “forcible transfer” and issues related to jurisdiction, defendant selection and corporate liability.
“By prosecuting even a few of the most serious instances of the crimes arising from illegal land grabs, the ICC can send a strong message to businesses and governments,” said Barrett.
“ICC prosecutions would help deter future violations and potentially bring justice to victims of illegitimate land seizures. Prosecutions would also help expose the bleak reality of so-called ‘economic development’ projects that profoundly harm rather than help local populations, while unjustly enriching government, military and business elites.”\
While PNG — as a signatory of the revised Cotonou Agreement between the African, Caribbean and Pacific Community (the “ACP”) and the European Union (the “EU”) — has committed to take steps towards the ratification and implementation of the Rome Statue and related instruments, it has neither signed nor acceded to the Rome Statute.
Nonetheless, Article 12 of the Rome Statute — which specifies preconditions to the exercise of the ICC’s jurisdiction — stipulates that the ICC’s jurisdiction extends beyond simply “[t]he State on the territory of which the conduct in question occurred,” to also cover States “of which the person accused of the crime is a national.”
As many instances of land grabbing in PNG involve Australian or Canadian companies and their nationals, a case involving such actors could potentially be brought before the ICC. There also remains the possibility that the ICC may gain jurisdiction over a non-State Party such as PNG via referral of the situation to the ICC Prosecutor by the UN Security Council.
The IJHR Clinic presented a confidential version of the manual to the International Criminal Court’s Office of the Prosecutor in The Hague in February 2018. The shorter public version of the manual is available on the Allard IJHR website: http://www.allard.ubc.ca/IJHR/publications.