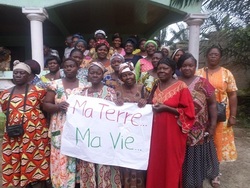 “My land, my life”. Women in Cameroon. Photo: Radd

By the end of 2000, the fever for agricultural lands in Africa for large monoculture operations had accelerated. Today, this fever increases with emerging policies that consider these initiatives to be great development projects that create jobs and added value. For the most part, these projects are well received by national and local decision makers in the areas where they are implemented. It is absolutely necessary to put on the activist hat to demonstrate and establish the need to protect those who are excluded from this system.

“Now is the time: Rural and Urban Activists Transform the Lives of Women” is the theme chosen this year by UN Women–Africa on the occasion of the 33rd International Women’s Day. For us activists who are committed to improving the lives of women, this issue gives us the opportunity to question public opinion on the particular case of rural women who are victims of land-grabbing. It is also a good opportunity to talk about the abuses that victimize these women, sharing possibilities to take action in order to intensify struggles against these discriminations and violations.

Abuses Towards Women Who Coexist with Plantations

Let’s face it. Large-scale agricultural projects maintain a system of impoverishment of the populations that surround them, instead of offering the development that companies and their allies claim they bring. Women, who are the centerpiece of the family unit, are the most affected.

– The risk of rape in or around the fields increases for women living near plantations. The rapists usually go unpunished. Plantations tend to occupy the land that surrounds the communities, and therefore, in order to reach the small parcels where they grow food on the edges of plantations, women have to walk a lot through the plantations. These paths are usually plantation company property, and therefore receive little traffic, with the exception of security guards;

– In areas of industrial exploitation, women living around plantations are searched, having their privacy violated. They are raped, tortured and dragged to court because they have a palm nut or a little bit of palm oil, even when these come from their own oil palm trees. They are prohibited from consuming oil palm by-products, despite the fact that these products are the basis of their diet. Security guards have even burst into homes to inspect what women are cooking, and have turned homes upside down looking for palm oil. Guards destroy any oil that they find, even if the women say it comes from their own palm trees. Guards also destroy the traditional oil that women sell in local markets near plantations;

– In order to obtain a means of subsistence, women are forced to work as plantation workers, where they are subject to schedules that make it impossible for them to ensure their children’s education;

– Children’s Futures are compromised. Often under-schooled, children are also precarious and over-exploited workers, even when they are underaged; or they are unemployed. The percentage is on the rise of children living around plantations who turn to drugs, delinquency, or alcohol, and who are regularly jailed;

– Those women who try to resist the advance of plantations onto their community lands are threatened by the system installed by the same companies exploiting their lands, and their lives are in danger;

– Lands where women have always produced food for their families are taken away from them. They are often displaced without any reasonable or lasting compensation. They are forced to travel long distances, up to tens of kilometers, to find arable lands. They often rent these lands each season to plan their crops until the soil is exhausted. Consequently, either their families do not have enough food, or they are forced to eat poor quality food. All communities adjacent to these monoculture tree plantations are characterized by hunger, malnutrition and food dependence;

– Forests and biodiversity—which are the source of these women’s traditional values, and from which they obtain the basis of their economic and cultural resources—are literally destroyed, worsening climate change. This makes women more vulnerable, as it drastically lowers their income.

– Throughout Africa, the lovely promises made to communities by the companies who are grabbing their lands—such as the installation of social infrastructure (water supply, construction of and equipment for schools and hospitals)—are never met;

– Communities do not have drinkable water, because the groundwater is contaminated by the chemicals used on the plantations;

– In communities surrounding plantations, factories drain their used water, which places women’s health and the health of their descendants in permanent risk;

– All of the misfortunes that befall these women come from the installation of the company that is exploiting their lands.

It is the moment for activists to take action!

We advocate for urgent actions in the short and medium term. More than ever, it is time to express our legendary female solidarity. By simply joining forces, energies, resources and strategies, we can advance the cause against abuses towards women living around monoculture tree plantations. We must express this solidarity through formal and informal alliances which begin at the community level, and which intensify throughout the country and subregions, reaching the level of the African continent and the global level.

The time has come to hear the voices and struggles of those millions of women who live around plantations, and to radically rise up in solidarity with them to help them transform their lives. If we do nothing, we risk being accomplices to the imperialist system—a system that promises exclusive development, creates new generations of vulnerable populations, amplifies discrimination against women and generates the basis for informal immigration. These problems with the places where they live are what drive young people to carry out feats that risk their lives.

The time for action is now!

Almost three months ago, the Cameroonian Association, Network of Actors for Sustainable Development (RADD, by its French acronym), and its allies launched an African petition to stop this repression of women. We invite you to join, by signing and getting others to sign.

It was after visiting impacted communities in Cameroon, Gabon and Sierra Leone that we felt the need to take these women’s grievances to decision-makers. In this petition, women who suffer these impacts—in their vast majority—demand that their land be returned to them. They want to be involved in decision-making processes concerning the management of their lands. By signing this petition, you will help force those who are in strategic decision-making positions to review their policies and rethink the ways in which lands are transferred in African countries.

From now on, faced with the precariousness of their situation, affected women are requesting support on the following:

– Legal assistance and guidance for affected women, women leaders and women activists who suffer threats and are dragged to court because they have resisted multiple abuses. This demand is very important, because denouncing the police is useless and often exposes women to more violence;

– Strengthening of affected women’s knowledge about defending their rights. Often, particularly in remote rural areas, women are left without access to information, which is vital in organizing to demand respect for their rights;

– Security for activists whose lives are frequently threatened;

– Creation and development of economic alternatives. These women need to develop income-generating activities to aspire to autonomy;

– Respect for and application of signed agreements. Once installed, plantation companies who exploit lands fail to respect the social commitments they have made with neighboring populations;

– Review of land transfer processes which do not take into account the opinions of neighboring communities, who are excluded from decision-making spaces and thus discriminated against and disadvantaged.

These are some possible areas of action, among many others, where urgent participation is needed to improve the living conditions of these rural women.

Let us join together with activists worldwide to stop discrimination and abuses toward these women!